Verstappen: It would have been an easy podium 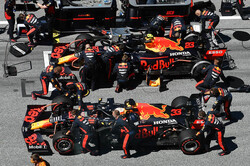 Rather than a win, possibly even a double-podium, Red Bull left the Austrian Grand Prix empty handed, the only team to score a double DNF.

While Alex Albon's race ended courtesy of a suspected engine issue following another clash with Lewis Hamilton, Max Verstappen's afternoon came to an end on lap 10 when he pulled into the pits due to an (as yet) unidentified problem which saw his engine seemingly switch off then on again, albeit with reduced power, dropping the youngster to the back of the field after he'd been running second to Valtteri Bottas.

"I suddenly just lost power, drive, and got into anti-stall and stuff," said the Red Bull driver. "I don't know what the problem is yet, we'll find out but of course it's not how you want to start."

Having held off Norris on the opening lap, Verstappen was settling down for a tactical battle with Bottas, the Dutchman being the only driver at the front starting on mediums.

That said, his subsequent retirement aside, Verstappen didn't feel he could successfully challenge the leading Mercedes.

"Quite quickly you could see that Valtteri was quite quick," he said. "I was just trying to do my own pace, but it would have been an easy podium. But what can you do about it?

"This is racing and it is what it is, you can't change the result now," he added. "It is a shame for everyone who worked so hard to get us here this weekend but we will just focus on the race next week and hope for something better."

"The first race of the season ended with three of our cars retiring, which is disappointing," admitted Honda's technical director, Toyoharu Tanabe. "Verstappen was going well from second on the grid, until he had to retire due to an electrical issue.

"Albon was very unlucky to lose second place in the last few laps, but he was still fighting for points until he also had to retire, due to a suspected PU electrical issue. At the moment, we are investigating the causes of the two failures."

"It looks something on the power unit side with Alex," agreed Christian Horner in terms of Albon's retirement. "We don't know if that's a result of the knock that he had or the trip through the gravel. We turned the engine off as a precaution.

"This sport can be pretty brutal sometimes," he added, "and it feels like today's been one of those days."