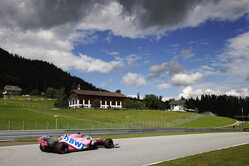 Ahead of today's opening session the air temperature is 25 degrees C, while the track temperature is 41 degrees. It is bright and sunny. However, heavy rain is expected for much of tomorrow, though Sunday should be fine again.

While Mercedes and Red Bull will be seeking a significant improvement in reliability this weekend, all eyes are on Ferrari which has fast-tracked the upgrades originally scheduled for next weekend.

Though many believe the drop in performance - one a second compared to 2019 - is down to the engine, Ferrari believes the upgrades introduced this weekend, including a new front wing and floor, will make a difference.

Racing Point will be seeking an improvement also, the Pink Panthers not s impressive in the race as they were in the sessions leading up to it.

Likewise Renault and McLaren who both feel they were at a distinct disadvantage on high fuel loads.

There are two reserve drivers on duty this morning, Jack Aitken at Williams and Robert Kubica at Alfa Romeo.

As the lights go green Ocon is at the front of the queue, ahead of Kvyat, Vettel, Raikkonen and Norris. Verstappen is another early riser, the Red Bull sporting a large sensor gate.

Raikkonen is sporting a strange looking sensor on his rear wing. Alfa very much off the pace last weekend - as were all three teams running the Ferrari power unit.

Six minutes in and all bar Albon and the Mercedes duo have appeared.

Sainz (hards) posts the first time of the day (1:07.190) as Ricciardo complains that his right mirror is "warped".

Fifteen minutes in, Bottas is the first of the Black Arrows to appear. The Finn posts 6.613 to go third.

A 6.087 sees Verstappen go top on the mediums, as Hamilton finally heads out.

As Vettel improves to 7.377, Ferrari confirms that Leclerc is running the new floor.

Latifi has stopped on track, which brings out the yellow flags and then the VSC. On-board footage suggests a gearbox issue.

The session is red-flagged while Latifi's car removed... or rather while it isn't removed as the marshals are struggling to get it through the gap in the barrier.

The session resumes and Verstappen and his teammate are among those chomping at the bit to get going again. Norris heads out on softs.

Verstappen is told to stay off the yellow kerbs... and don't even ask about yellow snow!

Verstappen improves to 5.856, as Hamilton and Bottas head out.

Albon complains of "too much understeer" in low speed.

Approaching half-time, the only driver yet to post a time is Magnussen. Indeed his car is up on its stand with the floor removed.

Just before half-time, Leclerc goes second on the softs, the youngster crossing the line at 5.838.

After 45 minutes, it's: Verstappen, Leclerc, Perez, Albon, Sainz, Kvyat, Bottas, Norris, Stroll and Gasly. Other than the Magnussen, Latifi, Aitken, Kubica and Grosjean are at the wrong end of the timesheets.

As Leclerc continues his race sim, Bottas, Hamilton and Ricciardo head out to join him. All three are on mediums.

And just like that Verstappen is demoted to fourth as Hamilton goes quickest (5.208), ahead of Perez and Bottas (5.381). However, the Mexican's time is subsequently deleted for exceeding track limits.

Undaunted, Perez (softs) goes quickest next time around, stopping the clock at 4.867.

Stroll goes fourth with a 5.476, like his teammate he is on the softs.

Kvyat goes seventh with a 5.815, ahead of Leclerc, Ocon, Albon and Grosjean.

Aitken complains of understeer in the middle of T4.

Verstappen heads out on softs for the first time. As the Red Bull driver has a poor opening sector, teammate Albon complains of "huge understeer mid-corner".

Verstappen goes second with a 4.963, despite is looking a somewhat unconvincing lap.

Raikkonen heads out, the Finn looking to improve on 15th.

Having posted a 5.770 on the softs, which is 'good' enough for tenth, Vettel is out of the Ferrari and already removing his helmet. Not a good sign.

The Mercedes pair, both currently on their high fuel runs, like Albon, haven't tried the softs and instead posted their best times on the mediums.

After reporting something loose in his foot-well, Bottas is told to box.

With 8 minutes remaining, Leclerc heads out on a brand new set of softs. Moments later, teammate Vettel heads out, also on a fresh set of the red-banded rubber.

As if we didn't know, Perez is told he is setting a "very fast pace".

A spin for Kvyat briefly brings out the yellows, as it is clear that Magnussen will play no further part in the session, the Dane having completed just 3 laps.

So, strong pace from the Points and Bulls, particularly Verstappen, but with Mercedes still to try the softs it is going to be interesting to see what the Black Arrows have up their sleeves.