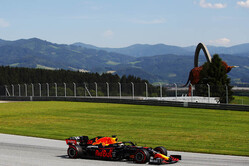 However, with the threat of heavy rain tomorrow, there is talk that should qualifying be washed-out the grid order would be based on how drivers finish in this session.

Max Verstappen was second quickest, ahead of the Mercedes pair, but with neither of the Black Arrows trying the red-banded softs we have yet to see Messrs Hamilton and Bottas at full stretch.

Despite the new floor and front wing, Ferrari didn't impress, and the fact that the works cars were both almost a second off the pace and the customers teams over 1.5s, backs up the claims that it is the power unit where the team is hurting.

Carlos Sainz was seventh, ahead of Ricciardo, Kvyat and Ocon as the midfield battle continues to both mystify and entertain.

The race sims this afternoon will be interesting, especially for those teams, like McLaren and Renault, who struggled in the early stages of last Sunday's race.

And talking of McLaren, Lando Norris has been handed a 3-place grid penalty for passing Gasly under yellows this morning.

Having handed their cars over to Jack Aitken and Robert Kubica this morning, this afternoon George Russell and Antonio Giovinazzi are back in their cars.

There is a 5-minute delay due to the fact that numerous incidents led to the F3 session over-running.

Mindful of the fact that this session could decide the grid we are likely to see some qualifying runs later in the session.

The lights go green and Grosjean leads the way, followed by Giovinazzi, Latifi, Raikkonen and Leclerc. All are on softs.

No messing around this time, in moments there are five names on the timesheets, Leclerc leading the way with a 6.163.

A 6.250 sees Sainz go second as Norris and Kvyat head out.

Moments later, Raikkonen goes second with a 6.162 as Norris goes fifth, ahead of Giovinazzi, Grosjean and Latifi.

"You can afford to go a bit slower... for your tyres," Raikkonen is told. "But I have to charge," he replies. "It's not an easy compromise," is the response.

Clearly most drivers are doing their race sims now and will do their qualifying sims late in the session.

No sooner has Sainz gone quickest than Perez and then Stroll (5.456) go quicker.

"Are you OK?" he is asked. "Yup," the Australian eventually replies.

It's a big crash, the Renault driver losing the rear of the car in the high-speed corner and heading backwards into the barriers.

There's a lot of damage to the rear of the car. Indeed, Ricciardo is limping as he trudges through the gravel.

"The front tyres, they cool down too much," says Grosjean, "I don't know... help me guys."

The session resumes with just over an hour remaining.

Hamilton is first out. The Briton, on mediums, is one of four drivers still to post a time.

A 5.088 sees Hamilton go top as Verstappen complains that he has "no power". "It's cutting, fourth, fifth gear, after that there is no power." He is told to pit.

Bottas posts 4.999 on the mediums, but Sainz, Norris and then Stroll all go quicker on the softs. Moments later Perez (softs) bangs in a 4.087, as Stroll's time is deleted.

His power issue resolved (he hopes), Verstappen heads out for his qualifying sim on the mediums.

The Ferrari are ninth and tenth, Leclerc the quicker of the two, though both are over 1.4s off the pace.

Verstappen's time is deleted as Norris goes second with a 4.961.

Elsewhere, the yellows are waved when Albon spins at the exit of T3 after carrying too much speed. "We've got these weird snaps mid-corner," he reports.

Far from being happy at being held up by Bottas, Verstappen lets rips. He crosses the line at 4.570 to go second (again).

Verstappen is second on the mediums with a 4.570, 0.483s off Perez pace, while the Mercedes pair are fifth and sixth, both over 0.9s off the Mexican's pace.

Ocon goes fourth with a 4.903, the Frenchman Renault's sole runner.

Vettel and Hamilton both head out on new softs.

Both post PBs in S1, the German crossing the line at 4.772, while Hamilton posts 5.088. However, the German's time is deleted for exceeding the limits in the final corner.

Leclerc improves to fifth with a 4.706, however unlike his teammate he didn't exceed the limits.

On a fresh set of softs Stroll goes quickest in S1. Moments later he crosses the line at 4.241 to make it a Racing Point 1-2.

Meanwhile, Norris has posted a 4.541 to claim fourth, ahead of Verstappen and Hamilton.

Verstappen splits the Points but his time is almost instantly deleted for a transgression at T10 and he slides back to sixth.

As Albon goes fifth (4.437), Bottas heads out on another set of fresh softs.

PBs in the first two sectors are followed by a purple in S3 as he crosses the line at 3.703 to go top.

Now Hamilton heads out on a fresh set of the red-banded rubber. A PB is S1 is followed by a poor second sector. Another PB in the final sector sees him post 4.406 to go fifth.