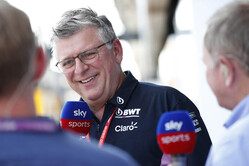 Despite talk that Dietrich Mateschitz would like to see Sebastian Vettel back in one of his cars, Helmut Marko and then Christian Horner ruled out such a move, the Briton stating a "definite no" to the move.

"We had a brilliant time with Seb," Horner told Sky F1, "and he will forever be a part of our history.

"We didn't expect him to be on the market this year," he continued, "and our commitment is to our existing drivers.

"We think we've got a great pairing in Max and in Alex, we think that has great potential for the future as well.

"So unfortunately it's not something we are going to be able to accommodate. That is a definite no, I'm afraid. Sebastian I think is aware of that."

Understandably, with Fernando Alonso returning to Renault, Vettel's options are rapidly diminishing however, the improving performance of the Racing Point might make the Silverstone-based outfit an attractive proposition.

However, once again there appears to be no interest in the German.

"Like I've said before, it's flattering that everyone thinks that a four-time world champion would come to our team," said Otmar Szafnauer, "but maybe that's because the car is a bit quicker now.

"We have long contracts with both our drivers," he added, "so it would only be logical that we don't have space."