It's official! Alonso returns to F1 with Renault 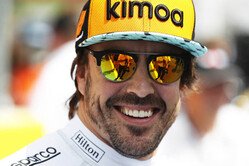 Renault has officially confirmed that Fernando Alonso will partner Esteban Ocon for the 2021 season.

With 314 Grand Prix starts, 32 wins and 97 podiums, Fernando joins Renault DP World F1 Team for the upcoming seasons. Given the strong historic and emotional bond between the team and Fernando Alonso - Renault and Fernando won their two world championship titles together in 2005 and 2006 - this decision is both bold and meaningful for the future.

Renault, with its values, is one of the greatest brands in Formula 1. Fernando is a great driver returning to F1 enriched by other experiences and willing to build with his much-loved team.

The tenets of work, surpassing oneself and ingenuity as well as Fernando's DNA defined by tenacity and pure talent make this union an obvious one. He will be an asset in the many efforts to win back the title and will give meaning to Renault's commitment to the highest level of motorsport.

The desire is to build a team around two complementary drivers, combining experience and youth, and pooling their values and talent in the service of the project. Fernando's fighting spirit should benefit the whole team and allow everyone to achieve their goals.

The announcement comes days after team boss, Cyril Abiteboul gave insight into what sort of driver he was looking for to replace McLaren-bound Daniel Ricciardo.

"We are very clear about the nature of our team," he continued. "We are a bit of a unique team in the Formula 1 landscape, but at the same time very loyal to Formula 1 but also a young team still in the making, with some struggles, in particular last year.

"So we need someone who is capable of understanding all of that and understand the value of all the work, ethic and effort we are putting into that. I am not saying that Daniel has not understood that. That's absolutely not what I mean. I am talking about the future.

"We are talking to a few names," he admitted. "Some big names, some lesser-known names. We are taking the time and again making sure that there is a good alignment between what we are and what any driver is looking to get in a team like ours."

"The signing of Fernando Alonso is part of Groupe Renault's plan to continue its commitment to F1 and to return to the top of the field," said Abiteboul in today's official press release. "His presence in our team is a formidable asset on the sporting level but also for the brand to which he is very attached. The strength of the bond between him, the team and the fans make him a natural choice.

"In addition to past successes, it is a bold mutual choice as well as a project for the future. His experience and determination will enable us to get the best out of each other to take the team towards the excellence that modern Formula 1 demands. He will also bring to our team, which has grown very fast, a culture of racing and winning to overcome hurdles together.

"Alongside Esteban, his mission will be to help Renault DP World F1 Team prepare for the 2022 season in the best possible conditions."

"Renault is my family," said Alonso, "my fondest memories in Formula One with my two World Championship titles, but I'm now looking ahead.

"It's a great source of pride and with an immense emotion I'm returning to the team that gave me my chance at the start of my career and which now gives me the opportunity to return to the highest level. I have principles and ambitions in line with the team's project. Their progress this winter gives credibility to the objectives for the 2022 season and I will share all my racing experience with everyone from the engineers to the mechanics and my team-mates.

"The team wants and has the means to get back on the podium, as do I."

Alonso, who left F1 at the end of 2018, is due to take part in the Indy 500 late next month, the Spaniard seeking to emulate Graham Hill in securing motor sport's 'Triple Crown', by winning the Monaco Grand Prix, Le Mans - which he won twice with Toyota - and the iconic event at the Brickyard.