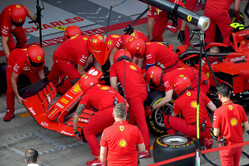 Having almost nonchalantly announced that there would be no upgrades until the third race of the year, the Hungarian Grand Prix, Ferrari was spurred into action following its disappointing form last weekend.

While Sebastian Vettel failed to make it into Q3, Charles Leclerc did so by the skin of his teeth. Though the record books will record they youngster as finishing second on Sunday, the reality is that, other than a determined drive, his podium appearance owed more to luck and safety cars than judgement.

While the debate over how much Ferrari's lack of pace is down to its aero and how much to its power unit, last week's performance has caused the Maranello outfit to bring its upgrades forward.

Speaking ahead of the weekend, Vettel said the back-to-back races at the same venue present the team with a "massive opportunity" to rate the upgrades which include a new front wing.

"We don't know how long the season will be," said the German, "but for sure it will be a good indication for us to see if it's the right direction for us or not.

"You always have certain expectations," he continued, "but the best answer is the stopwatch when you get on track.

"Obviously one is what we feel, and the other one is the times we are clocking," he added. "So we are excited about it and obviously interesting to see in direct comparison to last weekend where we will end up.

"It's a massive opportunity for us to have the race held at exactly the same place. So I hope we will get some answers."

Speaking about last week's race, the German having said his car on Sunday was "unrecognisable" to what he had driven for much of the weekend, he said: "We had a close look to my race performance in particular which was off compared to the weekend up to that point. We found a couple of things. It's hard to say how much difference those things were making, we had an issue with the brake, maybe something with the damping of the car.

"Tomorrow will be an important day in that regard, but also in regards to the upgrade to see if everything is bringing the step that we are expecting."

"I think it will be important that these updates are working the proper way and we make a step from that," added teammate Leclerc. "This will show that we've been working in the right direction, if not, then it will be a bad sign.

"But I am confident that these updates will bring some performance into the car," he continued. "How much is still to be told on track, but let's see.

"Realistically, it's going to be very difficult," he admitted, "because Red Bull and Mercedes are very, very quick. Of course, the safety car helped last week, but we also made the best of our opportunities, and I think anything is possible if we just do the same this weekend. So that's what we'll try to do. If today we can be on the podium with pure pace performance, I don't think so. But we are working to change this."