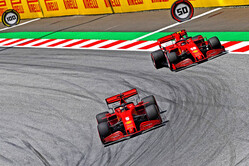 It was like a switch had suddenly been thrown.

The moment questions were raised about the ever-improving form of the Ferrari following a post-summer streak that witnessed three consecutive wins and five consecutive poles, performance mysteriously dropped again.

The FIA subsequently investigated the engine and to everyone's frustration its findings were never made public after it reached a controversial private agreement with the Italian manufacturer.

Since then, rivals such as Mercedes and Red Bull have made clear their frustration and at one stage legal action was mentioned, the Austrian team, whose driver, Max Verstappen had used the word "cheating", claiming that it missed out on vital points (and prize money) due to Ferrari's questionable advantage.

Throughout the Austrian GP weekend the murmuring has continued, and while Ferrari stands its ground, insisting that to reveal the FIA's findings would give away vital info to its rivals, the Italian team has consistently claimed that its lack of pace this weekend is mainly down to aero issues.

Strangely, customer teams Alfa Romeo and Haas appear to have similar aero issues, with both teams noticeably off the pace not only this weekend, but down on pace compared to last year's event.

As far as Mercedes boss, Toto Wolff is concerned, Ferrari's claims, and in particular those of Mattia Binotto, are a case of 'the prancing horse doth protest too much'.

"I don't want to comment on this," said a clearly frustrated Wolff, when asked about Ferrari's issues. "I think enough has been said.

"I don't want to talk about Ferrari," he added. "This is more about the way things are being managed. Let's not go back there."

However, go back there he did.

"I think everything has been said back and forth. They haven't shown great performance today. We want them to be competitive and race with us, race under the same rules, and nothing would make me more happy if we had three or four teams being competitive out there, and giving us a run for our money."

On Mattia Binotto citing aero as the reason for the SF1000's issues and talking down its chances, Wolff said: "Not they have talked it down, but Mattia has talked it down... I can't listen to that any more."

In a bid to curb manufacturer spending the engine performance rules are frozen, meaning that Ferrari cannot upgrade its engine this year.

"I have no insight in what Ferrari, where Ferrari's development stands," said Wolff. "Of course with the new regulations you are only able to introduce reliability upgrades, so normally a great performance jump is not to be expected, because that is what the regs say.

"I want to reiterate that we respect Ferrari a lot," he continued. "We want them to be fighting with us on the track. There are great people there, and we need Formula 1 and Mercedes, we all need the competition."

Asked about the drop in performance year-on-year, Romain Grosjean said: "It's always difficult to compare different years but in general all Ferrari power unit users have moved a little bit backwards, in qualifying at least, and the others have improved a lot.

"I guess we had an advantage last year that we don't seem to be having," he added.