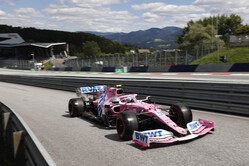 The grumbling began in Barcelona at pre-season testing, and while the cancellation of the Australian Grand Prix put the issue on the back-burner, the pace of the RP20 over the course of the Austrian Grand Prix weekend has had rivals bristling.

McLaren and Renault were among the teams that expressed unease over the similarity the RP20 bears to Mercedes 2019 contender, and following the performances of Sergio Perez (6th) and Lance Stroll (9th) in qualifying, others are sure to voice concern.

Throughout, Racing Point has insisted that it has done nothing wrong, and despite the (t)Racing Point jibes, technical director Andrew Green says that though influenced by the Mercedes, when he designed the RP20 he sat down with a blank sheet of paper.

"We designed the car from scratch," he said ahead of pre-season testing, "starting from almost a blank sheet of paper - which is very exciting, because the team hasn't been in a position to do this in a very long time.

"We've applied everything that we've learnt over the past seasons, combined this with what we've seen adopted by some of our competitors, and we've given it our best shot at optimising the final season of these present regulations."

As the pace of the car became all too clear during testing, he dismissed claims that his car was a clone of the Mercedes and that his team had received assistance from the German team.

Asked about the philosophy behind the RP20 however, he admitted that, in this particular department, Mercedes was in the mix.

Of course, once the RP20 hit that track in Austria, its rivals worst fears were realised, prompting fears that Red Bull's protest of Mercedes DAS system won't be the last protest to be lodged this weekend, though in the case of the RP20 this would have to happen after the race.

Asked if he is concerned at the possibility of the car being protested, team boss Otmar Szafnauer said: "No, not at all. It shouldn't be a surprise that the car is quick," he continued, "we're using the Mercedes windtunnel which is probably the best tool in the business, they've got great correlation, which means the efficiency of the tunnel is quite high.

"We took the opportunity this year because of our stronger financial situation to depart from a high-rake concept that we got inspiration from Red Bull on. We were always compromised when we're buying the powertrain from Mercedes, including the gearbox. They design their powertrain and gearbox to run a different aerodynamic concept than what we were running, and therefore that high-rake concept that was so well developed by Red Bull would only work so much for us.

"We took the opportunity this year to get rid of that compromise. It would only make sense to have a look at what Mercedes were doing if that's the kind of concept we're going to, and it worked out."

While McLaren has said that it does not now intend protesting the car, Renault, which has voiced the opinion that the RP20 breaches the rules on customer cars, is still considering its next move.

Of course, all this was before the RP20 revealed its true pace in qualifying.