It's "worse than we expected", admits Leclerc 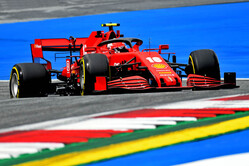 One always has to take claims from Ferrari with a pinch of salt. Indeed, in some cases a very, very, very large portion of sodium chloride.

However, following Charles Leclerc's claim on Thursday that his team was "99%" certain that it would struggle this year, it became clear during yesterday's practice sessions that perhaps he wasn't exaggerating.

While we have yet to see the teams in 'qualifying mode', it was a lacklustre performance from Ferrari, and one that leaves fans wondering if the Italian team might lose ground to the likes of Racing Point.

Speaking after the sessions, both drivers admitted that the car - which will not feature any upgrades until Hungary, and no engine upgrades for the remainder of the season - is lacking in all areas.

"It feels good to be back in the car," said Leclerc, "but on the other hand it's not a great day for us. It's probably even worse than we expected.

"Lots of cars are very close which is exciting to see on one hand," he continued, "but on the other hand we would like to be fighting a bit more up in the standings, so we need to work quite hard for tomorrow and we'll see how it goes."

Asked where the car is lacking, he said: "The thing that is difficult is that the balance is actually not that bad, we just need to catch up as an overall performance. Also the speed in the corners, we seem to lose compared to the others.

"The balance was quite good," he added, "but the overall grip of the car... I guess it's not only one thing, it's also the full package that we need to upgrade.

"We'll try different ways for tomorrow, to try to make the car work in a different way and see if we can gain some performance. Obviously it's very crucial to make the right choices tonight to come back with a stronger car tomorrow."

"I think we had a decent day," added teammate Vettel. "We didn't have any trouble with the car, so I think it was good first of all to be back in the car.

"In terms of speed and competitiveness, it was an interesting day," he added. "I think we've seen, we're not at the top, I think Mercedes were very, very strong as expected.

"Then there's a lot of stuff going on behind that. It's very tight, so we'll see. I think tomorrow will be a big day and we'll try to obviously be the leaders of whatever group there is behind Mercedes."