Leclerc: One of my best races 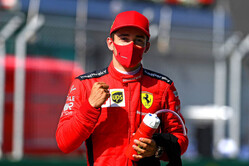 Unable to make a mark on Sergio Perez in the opening phase of the race, it very much looked as though Charles Leclerc would have to settle for 'best of the rest'.

However, a solid drive, not to mention the problems encountered by various rivals, saw the Monegasque join Valtteri Bottas and Lando Norris on the Subbuteo-style podium, having successfully overhauled both the Briton and Sergio Perez in the final laps of the race.

Speaking later, the Ferrari driver claimed it to be one of his best ever performances.

"I would rate this one probably as one of my best races since I arrived in Formula 1 because I really didn't do many mistakes," he said. "I'm extremely happy with the performance, also with the strategy, with our choices.

"It's not been easy because in the first part of the race," he continued, "the race was actually pretty boring for us, but I really pushed to stay focussed and yeah, we were doing some quite good lap times. We were extracting the maximum out of the car and it paid off at the end, so that was great.

"Towards the end of the race, it was very tricky because Lando had the new tyres too and I was struggling a lot at the restarts to stay behind them, until Turn Four and then, in all the high speed, we were very quick but in the whole first sector we were struggling a lot.

Asked if the team had made changes to the SF1000 following a particularly poor start on Friday, he said: "No, to be honest on Friday I haven't been driving well, I was just driving, I was not very happy with the car either but the driving was not well, where I wanted it to be, so I was quite hard after Friday, and then I was quite a lot happier with both the car and my driving on Saturday morning and put everything together in qualifying, so I was happy with this.

"And then the same for the race pace on Friday afternoon, which was pretty bad, actually very bad on my side and Seb's one was quite a lot better so I worked hard but I drove a lot better today so yeah, there's quite a bit on driving from Friday to Saturday but also on the car so we just put everything together for Saturday."