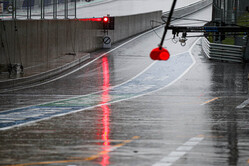 As expected, the Red Bull Ring was hit by heavy rain today.

Having caused a number of incidents during the F3 race, when the downpour persisted it was decided to delay the start of FP3 indefinitely.

However, forty minutes into the session race control announced that the session had been scrapped.

It now remains to be seen if qualifying will go ahead. Though scheduled for 15:00 (local time), it can be delayed in the hope conditions improve. If they don't qualifying would most likely be held tomorrow morning.

"There's lots of options to put it simply," said race director, Michael Masi according to the official F1 website. "If a worst-case scenario was to come about, we've already had a look and qualifying could take place on Sunday morning.

"If we had a complete washout on Saturday, free practice three and qualifying didn't take place and hypothetically qualifying couldn't happen on Sunday morning because of weather, we would revert back to free practice two times.

While some drivers, such as Vettel are hoping for a wet qualifying, Hamilton wants it dry, so the drivers will be watching events with interest.