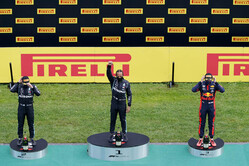 Q: Lewis, congratulations, normal service resumes: pole position, victory. You had it covered today.
Lewis Hamilton: Firstly I just want to say a big thank you to my team and everyone back at the factory. This has been... what a weird year it is but it is great to be back up here and to be driving and to be driving with this kind of performance. The team did a fantastic job with the strategy and then it was just for me to keep it together, stay off the kerbs and bring it home.

Q: You didn't quite get the point for fastest lap, that went to Carlos Sainz in the McLaren on a fresh set of tyres, but you had to look after the car a little bit through the race did you?
LH: Yeah, well I tried to get the fastest lap but of course on 40 lap-old mediums I wasn't going to get it over someone on new, fresh tyres. But that's OK, I'm so grateful to be back in first place and honestly it feels like a long time coming, obviously since the last race last year, and to come back this weekend after a difficult weekend last week, this is a great, great step forwards.

Q: it was certainly a champion's drive and we get to race again just next weekend don't we?
LH: I love this. I love back-to-backs. Can we just go back-to-back all year long. I might need a holiday in between though!

Q: Valtteri, you're still leading the world championship, that's the good news, but Lewis had the pace today.
Valtteri Bottas: Yeah, Lewis started from the pole, he had a good start, so he could really control the race and there was not so much happening as last weekend. But from my side, I think today was damage limitation, so still got good points, still leading, so it's not too bad. Yesterday was not ideal so that's why no 25 points today.

Q: A good fight with Max. You got past him, he got past you, but eventually you got the job done in the end. Exciting at Turn 4 there?
VB: Yeah, it was a good battle with him. Obviously I think I had quite a bit more pace than him at the end as we extended the first stint, but yeah racing closely is always good fun.

Q: So you can leave Austria and head to Hungary very satisfied?
VB: Could have been more satisfied but it's been a not bad first couple of races so looking forward to next week.

Q: Great drive Max, you tried your best to split the Mercedes and gave it everything you had.
Max Verstappen: Yeah, I tried but we're just a bit too slow, so I pushed as hard as I could and also when Valtteri was trying to pass me I tried to make it a bit difficult. I knew he was going to get by one lap later but it was at least fun because the rest of the race was pretty boring. A podium is good but still a lot of work to do.

Q: You got points on the board. Can you find any speed between now and next weekend? Have you got any goodies, any presents coming in the car?
MV: I don't know yet. We'll look into it and then we'll see next week.

Q: Lewis, many congratulations. It's been a pretty dominant couple of days for you with that pole position yesterday and the win today. Now, races are never as easy as they look, or are they? Were there any concerns for you today?
LH: Thank you. It's never easy. It was a challenge this weekend, especially with the Red Bulls really picking up their pace on Friday and we obviously had some sort of issue that we were able to rectify from Friday afternoon. Nothing major. And also, the team did a fantastic job over the week to improve on some of the issues we had in the last race. Today, being able to attack a little bit more and really utilise the car... I think the Red Bulls.... well Max, was quite quick today, so it just shows that they're definitely not a pushover. I think they've done a fantastic job so we've got to stay on our toes. We've got to go to places like Hungary, where the shorter Red Bull is usually very, very strong. Otherwise, it's been a great two days and a great way to bounce back from a difficult weekend in the first weekend, where Valtteri was incredibly strong and just a big, big thank you to everyone back at the factory and everyone here who has stayed. The team has stayed all week and been in every single day, not leaving a stone unturned, so that's a huge confidence boost.

Q: Valtteri, P4 on the grid to P2 at the flag. You mentioned damage limitation earlier. How was the performance of the car?
VB: I think the performance of the car was great, obviously yesterday as well I should have been stronger. There was obviously some things affecting the performance but even from my side the lap was not that clean and I should have been at least P2, so that's why in some things I'm going to have a look in the mirror why today was a bit more difficult and could have been possibly a good battle with Lewis. But I think, from where I started and how the race went, I think it felt like I and us as a team, we could really maximise everything, so being able to, as a team, get the first 1-2 of the year, only the second race, is obviously really impressive. Like Lewis said, I'm just really thankful for everyone. It's a privilege to drive for this team. But, of course, I'm not 100 per cent happy because I didn't win. That's how it goes as a driver but Lewis did a great job this weekend and... yeah... still points-wise it's still early days and everything is looking good, so that's why I can't wait for the future.

Q: Max, you were carrying some front wing damage for a large proportion of that race. How much was that compromising the performance of the car?
MV: I don't know, I didn't look in the data. I was just pushing as hard as I could to try and stay with them, y'know? But clearly, it's still not good enough. The gaps, compared to the guys behind were massive. I was a bit shocked. I tried everything I could but it's still not enough. So, we've still got some work to do but to bounce back from zero points last week to a podium now is a good start - but I think, as a team, we want to win and we want to fight for the Championship and if you want to fight for the Championship of course you need to win races, so yeah, we need to look into it. I think we were losing quite a bit on the straight as well. So it's a bit of both at the moment. Just need to keep on working harder to try and close the gap.

Q: (Alex Kalinauckas - Autosport) Lewis, how much was the gearbox issue over the kerbs, how much did that affect you again today and did you have to drive within yourself as a result - or were you able to push flat-out throughout?
LH: No, it wasn't a problem today. The guys did a great job during the week, understanding what the issue was. It was nothing particularly major but of course it could have had quite large consequences, so, they did a great job to rectify it and we haven't really heard them mention it since we started the weekend. So, we were able to drive as normal today.

Q: (Scott Mitchell - The Race) Max, you said you haven't dived into the data. Can you just talk a little bit through how the car was changing and handling through the race. Heard you talking about some traction issues or driveability issues at times. How was the car for you as the race developed?
MV: It was OK. Of course when the tyres are dropping off automatically you struggle a little more with the balance but there was nothing like dramatic, just the last 10-12 laps I started to struggle with the tyres but that's it.

Q: (Dieter Rencken - Racing Lines) Max, we heard you querying the timing of your pitstop, and then you seemed to run out of tyres towards the end. Do you believe that was the decisive factor?
MV: No, we were just too slow so we can do whatever we want: pitting early, late or the same, I don't think it's going to change the end result. So, at the time I thought we were pitting a bit early, and I knew of course that towards the end of the race I was going to run out of tyres but yeah, it is what it is. I said also on the radio at one point, never mind, just get on with the job.

Q: (Mark Hughes - The Race) Question for Max. In the initial part of the race it looked like you were hanging on to Lewis reasonably well but then they seemed to step it up. Is that a problem that you had or do you think that they just had performance in hand?
MV: No, I think it's more just Lewis pace-managing. Of course, he knows my lap times, that the gap is not closing or growing. I'm just doing my laps. There's always a bit of margin but if I would push more, Lewis would push more, so yeah. You could see once you have to push a bit more and you have the tyres to do so, then I'm just a bit too slow.

Q: Max, how confident are you that you're going to be more competitive in Hungary next weekend?
MV: Well, we'll just find out, don't we! Honestly, at the moment I'm not really... I don't know. That's the simple answer: I don't know. But I hope it's going to be a bit better.