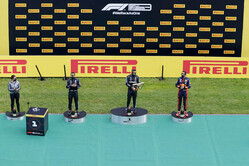 Both Mercedes drivers, who finished first and second, used the same strategy, but with Hamilton stopping seven laps earlier than his team mate.

Renault's Daniel Ricciardo was the highest-placed finisher to begin the race on the medium tyres, ending up eighth at the finish after a long opening stint.

Alpha Tauri was the only team to use the P Zero White hard tyre in the race (apart from Ferrari and Charles Leclerc briefly) with Daniil Kvyat scoring a point in 10th.

Red Bull's Max Verstappen and McLaren's Carlos Sainz made an extra stop for soft tyres at the very end of the race, to try and claim the extra championship point for fastest lap - which went to Sainz with a new lap record.

Mario Isola: "We had dry conditions for the first time since Friday, although as expected the ambient and track temperatures were lower than those seen during the race last week, making it a comfortable one-stopper even with the two softer compounds. Although there was a free choice of tyres for all drivers at the start this week due to the wet qualifying, the majority still chose to start on the soft, confirming the consistent performance shown by this compound here last weekend. Some drivers stopped twice today to go for the extra point for fastest lap, which was claimed by Carlos Sainz setting a new track record: an indication of the progress that these cars make not only from year to year, but also week to week. We're satisfied with the performance of all the tyres throughout both Austrian race weekends, during which we saw a huge variety of conditions that ranged from torrential rain to track temperatures in excess of 50 degrees."