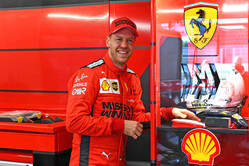 Reports in the German media claim that four-time world champion, Sebastian Vettel is heading to Aston Martin next season where he will replace Sergio Perez.

While the Mexican has a three-year contract which lasts until the end of 2022, it is claimed that it contains a clause which would allow the team to release him in exchange for a cash pay-out.

Speaking at the weekend, team boss Otmar Szafnauer, when asked if the team was open to offering Vettel a deal, replied: "Like I've said before, it's flattering that everyone thinks that a four-time world champion would come to our team, but maybe that's because the car is a bit quicker now.

"We have long contracts with both our drivers, so it would only be logical that we don't have space."

Of course, team owner, Lawrence Stroll has very deep pockets and paying off Perez wouldn't be an issue. Furthermore, amidst talk that Mexico is about to drop off the schedule, the Canadian will be eyeing the sponsorship opportunities that Vettel would open up.

At the same time, securing Vettel would bring the German into the 'Mercedes family', and we all know how close Racing Point (Aston Martin) and Mercedes are at this time.

A little known fact is that Mercedes boss, Toto Wolff is a significant stakeholder in Racing Point title sponsor BWT, and of course a stakeholder in Aston Martin also.

F1 bosses are also keen not to see Vettel leave F1, the Ferrari driver currently the only German on the F1 grid and still one of the sport's true stars.

Speaking at the weekend, as he continued to dismiss claims that Vettel might return 'home' to Red Bull, Christian Horner hinted that the German would find a berth elsewhere.

"He's got a couple of choices available to him," he told Sky Sports, "I assume either Racing Point, or a year out and re-evaluate the options in a year's time.

"I don't think Lance is going to get fired!" he added. "Of course, drivers' contracts between the teams, you never know what's within them, it's only the Contract Recognition Board that has full sight of them.

"I'm sure that perhaps they have options, or break points, or whatever. But that's really none of our business."