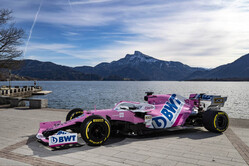 The statement follows the the Red Bull Ring's stewards decision that the protest is admissable and the subsequent impounding of the RP20's rear and front brake ducts for investigation and comparing to those on the 2019 Mercedes.

"BWT Racing Point F1 Team is extremely disappointed to see its results in the Styrian Grand Prix questioned by what it considers to be a misconceived and poorly informed protest," read the statement.

"Any and all suggestion of wrongdoing is firmly rejected and the team will take all steps necessary to ensure the correct application of the regulations to the facts.

"Prior to the start of the season, the team co-operated fully with the FIA and satisfactorily addressed all questions regarding the origins of the design of the RP20. The team is confident that the protest will be dismissed once it has presented its response."

While technical director Andrew Green admits to being influenced by the Mercedes he has always insisted that he started off with a blank piece of paper and no intellectual property of the German team's was used.

"We designed the car from scratch," he said ahead of pre-season testing when concerns were first raised, "starting from almost a blank sheet of paper - which is very exciting, because the team hasn't been in a position to do this in a very long time.

"We've applied everything that we've learnt over the past seasons," he added, "combined this with what we've seen adopted by some of our competitors, and we've given it our best shot at optimising the final season of these present regulations."

As the pace of the car became all too clear during testing, he dismissed the claims that the car was a clone of the Mercedes and that his team had received assistance from the German team.

However, when asked about the philosophy behind the RP20, he admitted that Mercedes was in the mix.