Verstappen crew made deadline by 25s 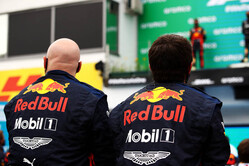 It was quite remarkable.

On a day we were hoping the weather gods would supply the drama, in the moments before the cars headed out to the grid for the start of the race it began to rain.

While the rain ended before the lights went out and despite the numerous threats throughout the race it never returned, the conditions had already provided possibly the talking point of the weekend.

On his way to the grid, Max Verstappen lost it at Turn 12 and went off into the barriers.

Though the damage to his front wing was obvious - it had been ripped off - there was concern as to whether the steering and suspension had also taken a hit.

Though some feared the worst, the Dutch youngster was told to make his way to the grid, at which point his crew sprang into action.

However, the clock was ticking, for the rules stipulate that the tyres must be on the car five minutes before the formation lap.

"I think Max went off three times on that lap," said Christian Horner. "The third one looked pretty terminal so we could immediately see the track rod and the push rod was broken, the big question was had it done the wishbone as well? If it had done the wishbone that would have been game over.

"We decided to drive the car to the grid and do our best to repair the car on the grid," he continued. "The mechanics did an unbelievable job. What would usually take an hour-and-a half they did in 20 minutes and with about 25 seconds to go. Full credit to them because without them that result wouldn't have been possible."

"I thought the race was over," he admitted, "but I managed to reverse the car out of the wall... it's like a 'never give up' mentality, still.

"I could have jumped out there and say it's over but clearly you could see that after the mechanics, they did an amazing job to repair that car and I was just very happy to start the race.

"The first lap was really good and from the onwards we made the right calls with strategy, when to box and what tyre to put on, and to be able to split the two Mercedes cars in the race after such a difficult weekend for us is a great result and something we definitely didn't expect."

Revealing the task his mechanics faced, even Lewis Hamilton was impressed.

"The track rod was broken I think," explained Verstappen, "the pull rod was broken so not the easiest things to quickly change but they did an amazing job to do that."

"They did that in 12 minutes?!" gasped Hamilton.

"Yeah, 12 minutes they managed to repair that, which is crazy... I was sitting in the car, I could see the mechanics screaming at each other like ten seconds, five seconds, put the wheel on, everything. I don't know if final piece of tape on the suspension to make sure it was sticking.

"I put my thumbs up and they were like, yeah, yeah, it's fixed, so I said OK, well then here we go, let's see. I was doing the formation laps, I was checking the wheels, I was like this feels alright, yep and during the race, nothing happened, nothing weird happens so it was fully repaired. So yeah, crazy."

Asked what was going through his mind during those 12 minutes, Verstappen admitted: "I was like 'let's see if they are going to make it' and if not then that's it, that's the race done, and the whole disappointing weekend would have been completed, you know.

"But they did an amazing job, so I was really fired up to get back in the car and show them that the effort was not for nothing, let's say it like that. Yeah, crazy. It was a crazy 10 to 12 minutes."

Asked if, in light of the previous incident, he was a little more circumspect when it came to the start, Verstappen was insistent: "No, no," he replied. "Like the first lap you go round anyway looking a bit around, OK, everything is settled but I just had really cold tyres on the lap to the grid and I locked up and just went straight so I knew... OK, I'll go a bit rearwards on the brake bias just to make sure that's not going to happen again but it's not like you're going to drive through that corner like a granny, you know. You have to keep on pushing."