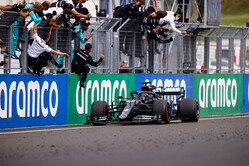 Having taunted us on Friday afternoon and threatened us again for much of Saturday, those pesky weather gods have been at it again.

Having hit the Hungaroring overnight, leaving the track damp for this morning's various support races, they have been threatening to return, spitting occasionally but never actually letting rip.

Consequently, though our hopes are up and our appetites whetted by events last week, it is still unclear if they're going to play ball.

Naturally we have a vested interest, for based on the opening practice session and yesterday afternoon, today's race is going to be a stroll in the park for the Black Arrows - no pun intended.

Indeed, if the weather gods don't play ball the best we can look forward to is that long run down to Turn 1, at which point the race could be decided, depending on which of the Mercedes drivers is ahead.

With that in mind, in terms of excitement we must turn our attention away from the two stars of the show and look at the support cast.

Having locked out the second row, other than whether they can avoid each other during the opening lap, the big question for Racing Point is whether Lance and Sergio can transfer their qualifying pace into race pace.

While there is no disputing (just protesting) the RP20's speed, the Panthers haven't yet fully delivered on Sunday afternoons.

Of course, behind them we have the Ferraris, and again, other than whether the two can avoid one another, the question is can they too transfer their qualifying pace into race pace.

For much of the weekend Sebastian has out-paced his precocious young rival at a track the German clearly likes. However, the SF1000 is clearly not a race-winning car - not in normal conditions (a hint to the weather gods) so perhaps a decent scrap between the pair might be the best we can hope for.

As far as Red Bull is concerned, Max and Alex will be praying that their qualifying pace isn't transferred to their race pace, both having struggled yesterday, indeed for much of the weekend.

To put it bluntly the car is all over the place, understeer ten oversteer, the sort of problems we usually hear Romain moaning about. Suddenly, and for no obvious reason, the RB16 has gone from being the biggest threat to Mercedes to facing a serious challenge from Racing Point.

Young Max has been unhappy since opening practice, and the signs are that this is going to be one of those 'off' weekends drivers have from time to time. That said, for a driver who has history and wears his heart very much on his sleeve let's hope that this doesn't lead to any silliness.

Sadly, sections of the media are already making much of Alex' relatively poor performance last Sunday and for much of this weekend. Then there's the twitchfork mob who insist they - or their favourite driver of the day - could do better.

We like Alex and we rate him highly. Sadly, Red Bull, and in particular Helmut Marko has history.

What Alex needs right now - what all drivers need from time to time - is a little support, a little TLC and ego massaging, as opposed to hectoring and threats. Indeed, on this particular matter we agree with George.

Sadly, it would appear that we can forget all about Alfa Romeo and Haas, the two customer teams paying the price for the Maranello outfit's actions last year.

With the Williams drivers both making it into Q2 yesterday, it appears that in the weekends ahead Nicholas will be making up the drop zone contingent along with Kevin, Romain, Kimi and Antonio. Not the best of possible farewell seasons for The Iceman.

This leaves McLaren, Renault and Alpha Tauri, and based on the evidence thus far the Woking outfit is most likely to come up trumps.

Indeed, though Racing Point is getting all the attention - and the protests - McLaren is more likely to leave here today with a grin on its face, albeit behind the mask.

The quickest strategy today is a one-stopper, as has often been the case in the past. The best way is to start on the mediums for 35 to 40 laps, and then go onto the softs until the end.

Second-fastest is actually a two-stopper, with two stints on softs of 21 to 25 laps each, then a final stint on mediums to the flag.

Of course this all goes out the window if 'you know who' decide to have some fun.

Ye Gods!!! Ninety minutes before the start our friends 'up there' finally make an appearance, the sky goes dark and the heavens open up... it looks like we're going to get a race.

The pitlane opens... at which point the rain stops. Nonetheless, the cars head out on Inters.

Though the rain has stopped as the cars head to the grid they throw up clouds of spray.

Oh dear, on his way to the grid Verstappen loses it in T12 and heads off into the barriers, ripping off his front wing in the process. It remains to be seen if he's damaged the suspension or steering.

"I've hit the wall," he reports, somewhat sheepishly. "It's suspension, everything," he adds. Nonetheless, he is pushed to his grid slot. He climbs from the car as it is checked out.

As the drivers head off for the national anthem, the Red Bull crew work frantically on the Dutchman's car.

By the way, that remains our favourite anthem.

As they work on his car, Verstappen is reduced to the role of helpless spectator.

With seconds to spare, the car appears to be ready as Verstappen climbs in.

Air temperature is 22 and the track temperature 28, the sun looks as though it is trying to break through.

All are starting on Inters bar Magnussen who is on full wets.

Verstappen thanks his crew for their work.

The field heads off on the warm-up lap. All get away.

They're away. While Hamilton gets away cleanly, Bottas appears bogged down and as he loses out to his teammate he is swamped by Leclerc and Norris, while Perez loses time behind the Struggling Finn.

As the make the run to T1, Vettel moves across to cover Bottas, while Stroll is second to Hamilton. In the first corner Vettel is on the inside while Verstappen goes around the outside, on the exit the German moves across and both wobble and as they head in to T2 it is the Red Bull driver who has the inside line.

Bottas is struggling to hold off Perez with Ricciardo hot on their heels.