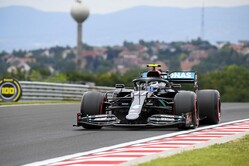 Following overnight rain the track was still damp earlier and though it has since dried there is the threat of further rain throughout the day.

Track conditions weren't helped when one of the cars in the F3 race detonated its engine leaving a trail of oil on the track, the mess compounded by the liberal addition of cement dust.

Yesterday's conditions turned things on their head somewhat, though there was no mistaking Mercedes pace in the earlier session, when, even on hards, Lewis Hamilton was over 0.5s ahead of the nearest non-Black Arrow.

In its efforts to find some pace - the lack of which left Max Verstappen more moody than usual yesterday - Red Bull burned the midnight oil. Indeed it broke the curfew. However as teams are allowed to do this twice over the course of the season there will be no penalties, fine or - God forbid - protests.

The opening phase of the session should be busy as teams seek to get in as much running as possible. However, with uncertainty over weather conditions this afternoon and tomorrow, they face some tough choices.

Although the race is being held earlier in the year than usual, it's actually only two weeks earlier, though the weather seems entirely different.

Norris gets proceedings underway, the McLaren driver followed by Magnussen, both are on softs. Grosjean subsequently joins them.

"It's spitting a little bit," reports Norris, which, you may recall, were his first words during yesterday morning's session.

As Vettel looks up at the sky, he sees some very dark clouds moving in. In yesterday's second session, held entirely in the wet, he was quickest.

While those before him retire to the pits after their install lap, Raikkonen stays out for a second. He is joined by Sainz.

As Sainz returns to his garage, Raikkonen improves to 18.617.

Surprisingly, almost ten minutes into the session, the Finn is the only name on the timing sheet.

As race control confirms that there is a 90% chance of rain, it would appear that the teams are basically accepting that qualifying will be wet also.

As Raikkonen continues lapping an empty track, he is eventually joined by Russell. The Briton is on the mediums, as is teammate Latifi who joins him.

Sixteen minutes in and Albon is the first of the big guns to head out, the Thai driver on softs.

Following a slightly unimpressive performance last weekend, it has been noticed that some sections of the media are already ramping up their 'speculation' over the Thai driver.

As Albon begins his first flying lap, Leclerc, Vettel, Verstappen, Bottas and Hamilton head out, all but the Dutchman on softs.

Bottas goes top with a 16.862 while teammate Hamilton backs off in S2.

Next time around, Leclerc and Hamilton trade fastest sectors. The world champion goes top with a 16.472.

Leclerc goes second (16.849), though he is clearly struggling.

Looking set to improve, having been quickest in S1, Verstappen spins in T12. The Dutchman appearing to carry too much speed into the corner.

A 16.876 sees Perez go fourth, as Stroll goes sixth, ahead of Vettel, Ocon, Albon and Ricciardo.

Following the earlier apparent apathy, there are now 18 drivers on track.

Albon reports "vibrations", and they're not the good variety.

Stroll goes fifth, having been quickest in S1.

A 16.278 sees Bottas go top while Hamilton aborts his latest run due to the sheer amount of traffic.

Currently sixth, 0.755s off the pace, Verstappen is the only driver on mediums.

Hamilton has his time deleted for exceeding the limits at T12.

On his next lap the Briton goes quickest in S2, subsequently crossing the line at 16.120 to go top. Considering the amount of traffic he had to negotiate that was impressive, especially in the final corner as he encountered drivers slowing for the pit entrance.

Gasly reports that he is "low on power".

Going quickest in S1, Perez looks set to improve. He loses pace in S2, and again in S3, which was either due to traffic or he was trying something.

Hamilton improves to 15.984 as Stroll pits following a massive lock-up in T1. Shortly after, Norris also has a moment.

Following that much appreciated burst of activity things quieten down as rthe drivers return to their garages. All save Latifi and Giovinazzi.

As attention switches to qualifying, the Ferrari pair are first out.

Ah, Leclerc is warned of a tailwind into T1.

As the Mercedes duo begin their qualifying sims, more and more drivers head out.

Bottas is the quicker of the two in S1, the Finn maintaining the advantage in S2. As Hamilton backs off (again), Bottas crosses the line at 15.437.

For the first time today Verstappen appears on softs, though he is not happy. "I can't get any gears," he complains.

Nonetheless he goes quickest in S1, while Hamilton posts a 15.602.