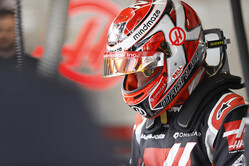 The Dane and his teammate, Romain Grosjean, were both summoned by the Hungaroring stewards for the "use of radio transmissions aiding the driver during the formation lap", a breach of Article 27.1 of the Sporting Regulations.

The stewards determined that though the team instructed the drivers to pit it could not prove that "one of the exemptions made under paragraph A. 2. a) to g) of the Technical Directive 011-17 was applicable".

Therefore, they considered this a breach of Art. 27.1 of the Sporting Regulations, in that the driver must drive the car alone and unaided.

Both drivers were handed 10s time penalties, which in Magnussen's case dropped him from ninth to tenth, while teammate Grosjean dropped from 15th to 16th.