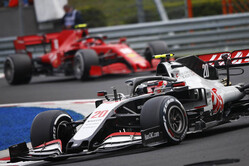 Both Haas drivers are under investigation by the Hungaroring stewards for an alleged breach of the driver aids rules during today's formation lap.

The summons by the stewards notes an "alleged breach of Article 27.1 of the FIA Formula One Sporting Regulations, driver aids during formation lap."

The rule in question states that: "The driver must drive the car alone and unaided".

Starting from 16th (Magnussen) and 18th (Grosjean), the Dane was the only driver to start today's race on full wets, while everyone else was on Inters.

On the warm-up lap, Daniil Kvyat suggested stopping for slicks before the start, which would require him starting from the pitlane however, the Russian opted not to pit and instead it was the Haas duo who pitted.

Courtesy of the canny decision, at one stage the pair were running third and fourth, though by race end Grosjean had dropped to 15th.

Magnussen however, accepting that he could not battle the likes of Vettel, Perez and Ricciardo, he yielded the places and drove home to finish ninth, scoring his and his team's first point of the season.

"I'm so happy," Magnussen told Sky Sports at race end, "the team took an amazing call before the beginning of the race. To call for slicks was an amazing call from the team and really strong for them to give me that trust to put me out on dry tyres in those conditions.

"It wasn't easy and it was really risky," he continued, "so they gave me that chance and it worked out. The pace was there to get the tyres alive and we moved all the way up. I started from the pitlane and after a few laps I was P3 or something and fully back in the race.

"I knew from there P3 wasn't for us," he admitted, "I was in P3 that was an amazing starting position in the race, I just thought 'I'll try and hang onto it as much as I can'.

"I was thinking, trying to judge where I might be able to hang on, because there's no point in trying to hang onto P4 or P3 because you'll just lose too much time, so I was asking the team 'where do you think I'm going to be' and eventually it was P9.

"I held onto it, I opened the gap to a Ferrari, who would have thought that? I was able to keep the McLaren away.

"It just shows what a good car we have in the race and it proves that the team has done an amazing job even though we're struggling a little bit in qualifying, we are strong in the races."