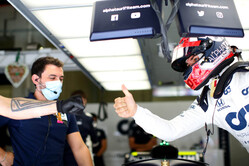 Due to the financial concerns raised by the pandemic it was agreed that the cars used this season would be used again in 2021.

However, with McLaren switching from Renault power units to Mercedes the FIA introduced a token system whereby all teams could carry out certain modifications to their cars as part of their limited development.

With their two tokens, teams can modify certain parts of the car rather than face the prospect of being stuck with the same car they ended the 2020 season with.

However, with an eye on those teams using components supplied by another team...

In other words, teams using homologated components from another team that required the use of tokens must also hand over their tokens.

However, those teams currently using 2019 parts can upgrade to their supplier's 2020 version without having to use their tokens, basically giving them a 'get out of jail free' card, particularly galling for rivals, such as Renault, considering Racing Point's current form.

"In the event the Customer Competitor has used for that TRC-H or FSC-H the 2019 specification of the Supplying Competitor during the 2020 season, but wishes to upgrade to the 2020 specification for the 2021 season, this change will be acceptable without the use of any tokens," state the most recent version of the 2021 regulations..

The Silverstone-based outfit currently uses the Mercedes 2019 gearbox while AlphaTauri uses Red Bull's 2019 version, next season both can upgrade to the 2020 versions without having to use their tokens.

Other than gearboxes, both teams use other components from their rivals, such as Mercedes steering and braking systems and suspension, all of which can be upgraded without the need to use their tokens.

However, the likes of Haas and Alfa Romeo - already suffering courtesy of Ferrari's engine 'issues' - already use the Maranello outfit's 2020 components so any upgrades would necessitate the use of their precious tokens.

To further complicate matters, teams have until Wednesday, 22 July, to notify the FIA exactly how they wish to use their tokens.

"The token system has been put in place ahead of the entire freezing we've got," said Mattia Binotto. "I think it was important to have at least two tokens.

"It's obvious that the system is overall, let me say, a compromise of the current entire situation post-COVID," he added. "We cannot be fully happy because, if you look where we are as Ferrari, our intention would have been to fully develop, but we understand the point, and I think that's part of, as we often said, part of the season compromises that have been taken during this period.

"As Ferrari, knowing our situation, we have been assessing it as an act of responsibility towards the entire F1 and the other teams," he continued. "So that's what we've got. We've chosen our tokens.

"I think that the only point on looking at next year, on which we are still debating, I think we are not fully happy that there are teams that eventually can upgrade their entire package from a 2019 to a 2020 package. That I believe would be unfair, because the season with two tokens is similar for everybody. We've got only two tokens, and everybody should be limited to that one."

"It was a necessary evil to be able to continue in this situation and part of the freeze decision for next year," added Renault's, Marcin Budkowski. "So, we're happy with the system. We're still looking at where best to spend them. We still have a few days and a few opportunities that we need to choose between.

"But I also support Mattia's view that the system has some flaws, unfortunately," he added. "There's a loophole there that would allow a couple of teams to benefit from the system, and this is something we're discussing with the FIA and the other teams, and we hope will be addressed."