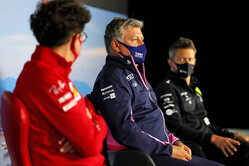 As Racing Point faces the prospect of further protests, Otmar Szafnauer insists "we are confident that we will win this protest and believe in the FIA's processes".

"We invited the FIA to our factory in March following the pre-season tests in Barcelona and after we heard rumours of potential protests," he said, as his cars threaten to edge out both Red Bull and Ferrari in today's qualifying session for the Hungarian Grand Prix.

"We invited the FIA to come and observe our processes and to interview our designers and aerodynamicists to understand how we developed this car, because it is significantly different to what we've done in the past.

"The FIA were happy that all the designs belonged to us," he adds, "that they are all ours and that we developed the car independently of anyone else.

"We have always been independent and developed our own components and have only added to that capability. When I first arrived at the team, there were 280 people doing that job. Now it's 480, so we've only bolstered our in-house capability.

"It's now a case of explaining what we have already explained to the FIA to the stewards as we resolve this process. We have to put together the evidence to show that our car is completely legal and that's exactly what we're working on now.

"We are confident that we will win this protest and believe in the FIA's processes."