Renault says protest is for the future of F1 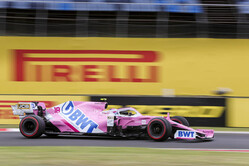 Understandably, other than the career prospects of Sebastian Vettel and Sergio Perez, the other big topic of media interest in Hungary this weekend is the investigation into Racing Point's 2020 contender, the RP20.

Shortly after the end of last weekend's Styrian Grand Prix, Renault made the move first expected in Australia back in March, and protested the two cars.

The Red Bull Ring stewards deemed that the protest was admissible and subsequently impounded a number of components for an investigation whose impact could reach beyond the Silverstone-based outfit to Mercedes.

Indeed, speaking yesterday, Renault executive director, Marcin Budkowski claimed that the outcome of the investigation would have ramifications for the entire sport.

"I don't want to get dragged too much into the details of the protest," he admitted, "because, as you can imagine, there's a stewards' decision pending.

"There's an FIA investigation ongoing which will be submitted to the stewards and they will make their decision based on this. It might go to the court of appeal if Racing Point or ourselves are not happy with the judgement. So, it's a process that's still ongoing.

"But for us it's important to clarify," he continued. "To clarify what is permissible and what isn't for this season. For the event we protested but for the rest of the season, for next season - but also what Formula One we want in the future.

"What is the model we want? Do we want the model where we have ten teams independently fighting each other, especially in the context of a fairer sport, a more equal distribution of funds, a cost-cap, so all teams eventually coming to a similar level of spending. Maybe not straight away but with time.

"And for us it's important to clarify what kind of level of exchanges is permissible. Is it permissible to get parts or get geometries from another team and use them on your car or not - because we don't think that's the right model for F1 in the future.

"It's really beyond the protest, beyond this race. It's what kind of model we want for the future of F1."

ASsked why the protest is against the brake ducts on the RP20, when from the outset it was the similarities of a number of other components that attracted attention, Budkowski said: "The main point here is that brake ducts are essential performance differentiators on today's Formula 1 cars.

"They're not only there to cool the brakes," he continued, "they are an essential aerodynamic device both at the front and the rear in terms of extracting aero performance.

"That's one of the reasons and the other reason is that they are surface that are visible to the eye and to the camera of the numerous photographers that go up and down the pit lane, but there are also surfaces that are impossible to see from the outside and it would be difficult to copy from pictures."

Asked about his expectations in terms of the findings of the investigation and whether they will lead to clarification of the relevant regulations, he said: "I don't expect the stewards to rule on the future of Formula 1, that's not their role, that's certainly not what we expect from the decision.

"We do think, however, that the decision will have implications on the model of Formula 1 if you want. If the stewards allow a certain amount of exchanges between the team then I think it will lead to a different model than if they are strong and say these are the regulations and it's really important that every competitor, every team designed its own car."

Asked if Mercedes involvement' in the investigation is a frustration, James Allison said: " No, I think it's pretty straightforward... there's an argument between Racing Point and Renault and in order to settle that argument the FIA need to seek some information from us because the dispute is about what brake ducts Racing Point are running and so we're perfectly happy to provide them with the information they asked for on last year's Mercedes brake ducts."

"There were rumours of a potential protest in Australia so our expectations were that something would happen," said Otmar Szafnauer. "We now have to put together the evidence to show that we're completely legal and I think we have three weeks to do that and that's exactly what we're working on now.

"I think the outcome will be bulletproof," he added, "which is quite nice, because there are things the camera can't see, especially the internal surfaces of a brake duct for example that we completely designed and developed ourselves.

"When you compare the two parts by the FIA, then they'll absolutely know that the brake ducts are unique, and our IP and designed by us."