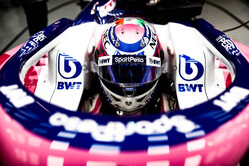 Following the drought of real news for much of the time before the cars returned to the track at the beginning of the month, suddenly the F1 paddock is the hotbed of rumour and speculation it has always been.

With Fernando Alonso now confirmed at Renault, the other big story doing the rounds is talk of Sebastian Vettel joining Racing Point for 2021 when the Silverstone-based outfit transforms into Aston Martin.

Speaking to the media today, the current incumbent of the Racing Point seat, Sergio Perez, added fuel to the fire, by claiming that, while he already has a contract for next season and 2022, he has been approached by another team.

Asked about reports that Racing Point is to exercise a clause in his contract and release him, the Mexican replied: "I think I'm with the team as far as I know... I have a contract. We will see what happens in the next weeks.

"I know that during the week there were obviously the rumours came out and we actually got contacted by a team in the paddock," he added. "I won't say obviously names, and also other teams in other categories, which was quite a surprise you know as we have a contract for the next years here, but at the moment they are just rumours.

"Nothing more to add from my side other than we've got a contract in place."

Asked if the speculation was a distraction, he said: "The team has taken a good step forward so it's good, you know, to have big names related to the team because that means we are making a good job, we are making progress, and I think the team should be proud of it.