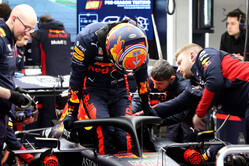 Alex Albon's fightback to fifth today will stand after the Hungaroring stewards deemed that his crew did not attempt to alter the grip of the track surface before today's race with leaf blowers, a breach of Article 22.3 of the sporting regulations.

Having heard from a team representative, the stewards reviewed video evidence and came to the conclusion that Red Bull did not attempt to alter the grip of the track surface.

"It should be a non-issue," team boss, Christian Horner told Sky Sports in the moments before the race, "they have leaf blowers blowing into the brake ducts to keep the cars cool.

"I'm surprised," he admitted, "obviously somebody has had a moan about it but it still looks pretty wet to me."

Race Director, Michael Masi subsequently admitted that prior to the start of the race he had warned teams about the practice.

"It's been around for quite a few years," said the Australian of the rule. "It was more just a reminder that I sent out prior to the start of the race, to remind everyone. The stewards investigated and deemed that there was no further action necessary.

"It was a report that was received, and the stewards investigated it," he added, "and obviously wanted to investigate it properly, which is why they waited until after the race, because it is something that is quite foreign, let's call it. They did their proper process to make sure it wasn't something that occurred."