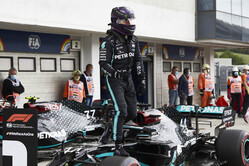 Although F1 and the FIA must be applauded for their efforts in getting the sport back on track, there are already cries of 'why did they bother?'

Three races in and Mercedes has twice the number of constructor points as its closest rival, while drivers Lewis Hamilton and Valtteri Bottas enjoy a lead of over one race win over their only realistic opposition, Max Verstappen.

Fans who waited months to see their sport on track are already claiming that it's the same old, same old, as the triple-headers threaten to become a series of Mercedes masterclasses.

Asked if he could imagine a scenario where Hamilton doesn't win a seventh title this year, Sebastian Vettel dryly replied: "Only if Valtteri wins the championship".

"I think Lewis is obviously the main contender," added his Ferrari teammate. "The only one that could probably stop him doing that is Valtteri."

While Max Verstappen and his crew all but stole the show yesterday, Hungary was mostly a weekend to forget for Red Bull, for while the Austrian team consolidated its runner-up position in the standings, the unpredictability of the RB16, not to mention its lack of pace, suggests the team is not capable of sustaining a serious challenge.

To further compound fans fears, let's not forget that this year's cars will continue to be used next season.

Despite a clean sweep which saw him take pole, the win and fastest lap, Hamilton, taking a leaf out of Toto Wolff's book of underdogs, insists that the title is not decided.

"Not from my seat position, no!" he told reporters following yesterday's victory. "We're working our arse off, and we're going to continue to do that.

"I don't know what's going to happen over these next races," he continued. "Would I like more battle from other teams? Absolutely. But, that's...

"I think the Red Bulls have been doing a great job and I think, I'm sure at some stage they're going to make some improvements as we get into the season.

"The race that we had last year, for example, was fantastic, and I enjoy particularly battling with other teams.

"I did expect this weekend the Red Bulls to be very, very strong but I'm not quite sure what happened through qualifying, what it might be but, again, in the race, they definitely were stronger.

"But I think it was a pretty flawless effort from the team this weekend," he said of his own team in a masterpiece of understatement. "In all areas, really delivered.

"I think it was a little bit difficult for sure to compete when you are bringing that 100 per cent. But I'm hopeful we will still find some challenges up ahead. So, we shall see."

"We have got something misbehaving aerodynamically," admits Christian Horner, "and it is a matter of understanding and addressing it. In certain conditions, the car is behaving as expected and we actually have some very good data from this weekend, so the team will work hard to try and understand it and resolve it as quickly as we can.

"We know we've got to tidy the car up and make life hopefully easier for the drivers and move us closer to Mercedes," he continued. "They have a phenomenal car at the moment and it's down to us to close that gap.

"It's a significant gap," he admitted, "but it depends on how much performance we can unlock. We know we've got the fundamental basics of a decent car, it's just not behaving as our simulation tools predicted it will and we need to understand that and make sure it's achieving what it should be doing, which hasn't been the case.

"There's a lot of good data from this weekend, and the team's working very hard to understand it and get on top of it."