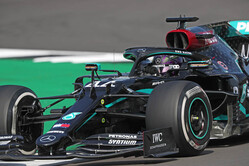 Ahead of today's second practice session the air temperature is 30.5 degrees C, while the track temperature is 42.4 degrees. It remains sunny and hot.

Valtteri Bottas led a 1-2 in this morning's opening session, as session in which only the soft tyres were used.

Nico Hulkenberg, once again standing in for Sergio Perez, was fourth quickest, while Daniel Ricciardo was down in 17th, out-paced by the Williams pair.

As expected, tyres still proved an issue with a number of drivers complaining of problems with their left fronts and rears.

The lights go green, but as ever it is some time before we witness any action.

However, there is action on the pit-wall, as Christian Horner pays a visit to Mattia Binotto.

Six minutes in and the silence is broken by the Ferrari power unit in the back of Grosjean's car.

He is subsequently joined by Magnussen, Kvyat, Ricciardo and Raikkonen. While the Australian is on hards the rest are on mediums.

"Focus on tyres and brakes," Kvyat is told.

Stroll heads out on softs.

Having handed his car over to Robert Kubica earlier, Antonio Giovinazzi is back in the Alfa this afternoon.

Grosjean complaining that his car is still "understeery".

As more drivers head out, Hulkenberg, like his Racing Point teammate, is on the softs.

With tyre sets strictly limited, drivers will be wanting to save their hards for Sunday.

On the mediums, Bottas goes quickest in S1, the Finn maintaining the pace in S2. At the line it's 25.917, as he improves on the previous best by over a second.

Leclerc is told he needs to improve "in to Turn 6".

Like Racing Point, the McLaren pair head out on softs, Norris posting 26.974 to go third and Sainz going fifth with a 27.215.

While Bottas is on mediums, Hamilton heads out on a new set of softs. A PB in S1 is followed by a purple in S2. At the line it's another purple as the world champion raises the bar with a 25.911, six-thousandths quicker than his teammate.

PBs in all three sectors see Ricciardo improve to sixth with a 27.057.

Bottas switches to softs and wastes no time in going quickest with a 25.782.

Ricciardo told he's slowing down too much in Turn 16 (Club), while also losing time in Turns 6 and 9.

As more drivers switch to softs for the qualifying sims, Leclerc goes sixth with a 26.812, over a second off the pace.

Hamilton heads out on a fresh set of mediums, as Gasly improves to ninth and Vettel eleventh.

"A bit of rear sliding and tyres dropping more in the last couple of corners," reports Bottas.

Ricciardo's latest time is deleted for exceeding the track limits at Turn 9.

"Too much rear deg," complains Kvyat.

While Leclerc is currently seventh, Vettel has slipped down to 14th.

Hulkenberg complains that something is moving at the back of his seat, or maybe the seat is loose.

Having previous had its drivers on different strategies, Mercedes now has both Hamilton and Bottas on the mediums.

Having lost track time earlier after flat-spotting his tyres, Magnussen goes wide in Chapel much to the obvious frustration of team boss, Guenther Steiner.

"We have seen the vibrations on data and it's still safe," Leclerc is told, "but box."

Hulkenberg has done 14 laps on his current set of mediums.

A difference of opinion between Sainz and Kvyat which ends up with the Spaniard running wide.

Stroll is the latest in a long line of drivers to suffer a wobble, the Canadian running wide in Chapel and just about holding it all together. Shortly after Raikkonen goes off at the same spot.

With 6:30 remaining, Vettel stops on track, just after Copse. As the yellow flags are waved he climbs from the Ferrari.

Replay reveals that the issue occurred on the old pit straight leading to Copse.

"OK, big failure at the back," he reports, "either engine or gearbox, something went in the drivetrain and it didn't feel right."

The Ferrari leaves a long trail of oil on the straight.

Meanwhile, the session is red flagged as Giovinazzi stops off track at Becketts.

With 2:00 remaining the session will not re-start.