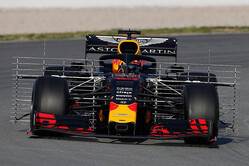 After two weeks of testing, opinions as to whether the new aero rules, aimed at assisting overtaking, actually work or not, are divided, with some saying they do, and others saying they don't.

Though we won't know for sure until a couple of race in, fears that the new rules would slow the cars were clearly unfounded with Sebastian Vettel's best time 0.961s quicker than the best time posted in 2018, also by the German.

Asked how he thinks the chances of overtaking might be improved this year, Max Verstappen is in no doubt.

"I would just make the floor of the car bigger,"! he tells his website, "so you are able to generate more mechanical grip and downforce from within the car itself.

"I would also make the front and rear wing smaller and less complicated," he adds, a suggestion that will be greeted with knowing nods by many millions of F1 fans around the world.

"For me it's not even about breaking records or going as fast as possible," he admits. "Racing was much more fun for me in 2015 than now.

"If you had a bad qualifying session you knew that you would be able to move up through the field because you were able to overtake," he continues. "Now you're just stuck and then not much happens anymore. It is what it is, but hopefully things will get better in the future."

"On the other hand, these cars are really great to drive during qualifying, if you see how much downforce is generated. At Spa or in Singapore qualifying is really fast paced and when it's bumpy, you get that sensation of speed even more."

Asked his thoughts on testing, and whether the gap between the top three has decreased, he admits: "I think that the teams behind of us have gotten a bit closer, but that was the case also at the start of the season last year.

"During the season, it tends to divide again," he continues. "Of course it partially has to do with the availability of funds and the right people, but it is also quite normal that a top team is able to develop itself more than a somewhat smaller team.

"If the smaller teams by chance build a very good car in the winter, they are able to benefit from that for quite some time. But eventually that advantage also fades away. That was evident last year. I think that Alfa Romeo and Renault have made a great leap forward, but then it depends on how the development will be."

In addition to driving the RB15 for real at Barcelona, Verstappen also spent time in the simulator.

"Actually we tested everything like I would have done on the circuit the day before," he reveals. "Then it's about looking how much it actually matches up, but the correlation was very good.

"This means that when you change anything on the circuit, it generates the same effect in the simulator. Even regarding lap times, and that's very important.

"During the season you need to set the car up in the simulator before heading off to the circuit. So then it needs to be the same of course."

Hard to believe, but this season will see the youngster contest his 100th Grand Prix. Asked if he regards himself as a young talent or seasoned pro, he replies: "I don't think I can call myself a young talent anymore because I am experienced now. I thought about it some time ago. Apart from that, it's the longest period in my life that I have been driving in a particular racing class."

"So far I think that we are looking good," he says, "but the championship is not won in Melbourne of course. We need to make sure that our performance is constant and don't have many drop outs.

"Hamilton only just won the championship after the summer break," he adds, "so there is still a lot possible. If I had scored decently in the first six races last year, I would have been fighting for second place in the championship. If we can be a little bit better than last year overall, then there is more to gain."

Nonetheless, despite a difficult start to 2018 he ended the year with eleven podium finishes and two victories.

"Considering the start last year, that was still a reasonable result," he admits. "It also depends of course on how well the engine and car are. But I also hold my own performance against that. As a team and Honda we want more than that, because we always want to be able to perform. If that's possible, I don't know yet."