Hamilton sends out a worrying warning to rivals 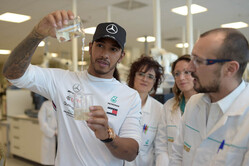 Whatever one thinks of Sebastian Vettel's various issues in the latter stages of the 2018 season, one cannot help but be impressed by the remorseless approach of his title rival Lewis Hamilton, who, much like Michael Schumacher in the early 2000s, allowed nothing to distract him from his objective and actually appeared to gain impetus from his rivals failures and weaknesses.

Therefore, despite the fact that it was clearly advantage-Ferrari in the opening teat, and Valtteri Bottas is already calling for updates for the Mercedes, the latest message from the world champion should have rivals quaking in their race boots.

"I feel stronger than I've been in a long time," warns the Briton.

The reason is that the Mercedes star has taken full advantage of the new weight regulations that have set a minimum weight for drivers (80kg), which is now separate from the weight allowance for the car.

As a result, those drivers at the bigger end of the scale have been able to cut back on their extreme diets and start 'bulking up', building more muscle mass.

"I'm still within the limit, so I'm good," Hamilton told reporters. "Every year when you get back into training it's painful. But trying different methods, I worked with several different people for once, to try different things throughout the weeks was exciting. And I get to take that throughout the year. Deep-rooted, core-wise, I feel stronger than I've been in a long time."

"Body fat is going down, which is great, and you target more defined, more efficient muscle," he continued. "I'm not trying to be The Hulk, naturally it takes a long time to put on muscle, and in the right way as well. It's just been great to eat as much as I want to, and bigger portions.

"I got in the car and I'd put a lot of weight on," he said of the opening day's test last Monday, "now it's come down again, I was back down another couple of kilos. That will fluctuate over the next weeks.

"I'm enjoying training more than ever before," he grinned. "If you make it fun, bring different elements into it, and do different things, that's what I try and do.

"Up to now, we have had to be a certain weight, each of us drivers, and it is not particularly great," he said of the previous rule whereby the driver's weight was included in the overall weight of the car, something which severely penalised the bigger drivers. "We had to miss meals and all these different things to try to hit the right weight limit.