Hamilton and Bottas both up for the fight in 2019 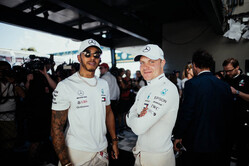 While the 2019 grid will see changes to the various line-ups at almost every team, Mercedes stays true to the line-up that won the team the 2017 and 2018 Constructors' Championships - Lewis Hamilton and Valtteri Bottas.

Following the winter break, both drivers are now eager to go back racing.

"Both Lewis and Valtteri spent the winter taking their minds off Formula One for a while, which is important" said Toto Wolff. "Lewis spent some time travelling. When we met after the winter break, he was refreshed; he's extremely hungry and wants to start racing again. Valtteri spent some time with his family in Finland, but he was quickly back into racing cars as he competed in the Arctic Rally. We had a good chat after the break; he was in a good place and has been able to fully reset after a season that was not always easy for him. Valtteri knows he has the full backing of the team to succeed and he's excited to get back in the car and show his critics what he can do. I'm really looking forward to a strong competition between the two of them, racing each other hard and fighting hard against our rivals."

"I had a great Christmas with my family and then I went snowmobiling, I went skiing, I went surfing with Kelly Slater, which was amazing," says Hamilton. "I completely switched off from racing for a while, trying to focus and re-centre myself and training hard for the new season. 2018 was a great year, but I feel like 2019 can be even better. I want to achieve more, I want to continue to keep pushing. I feel energised and I'm ready to attack."

"I had a really good winter; I'm full of energy and I'm looking forward to the new season," adds Bottas. "I started my first training camp in early January and have been on a good path ever since. I did most of my training in Finland, first in the south close to my home town, then further north in Lapland because that's where you get a proper winter. The conditions are quite harsh, it's freezing cold, snow is guaranteed, but it's a great environment to exercise and prepare your mind and your body for the upcoming fight."

"I am excited for the new season and that everyone starts with zero points. We are all on the same line and 2019 can bring anything; I'm going to go all in this year," he continues. "There was quite a bit of criticism at some stages of 2018, but that's actually been a positive thing for me because it's given me an extra boost! I'm now looking forward to drive the new car for the first time. The car has changed quite a bit because of the aero regulations changes, so it will be interesting to get an idea of how the car feels and how it handles. You never know what to expect and so it's exciting to jump in the car and discover it, to try to get a feel of the balance of the car and its behaviour. We do already push the car in the shakedown to get a feel for it."

As for the reigning world champion, Hamilton begins his seventh season with Mercedes, with which he has scored four world titles, 52 race wins and 57 pole positions since 2013.

"I'm really looking forward to the next step of our journey together with Mercedes and embarking on what's not been done before," said the Briton. "This is my seventh year with the team and the energy and the determination within the team are really inspiring. The buzz really starts at the beginning of the year when you see the car coming together. And then you get to the shakedown and you get into the car - it just never gets old. It feels like a real privilege - so many people have worked together to form that car and you know how much hard work has gone into it. Driving the new car is like meeting someone new for the first time - you want to get to know them the best way as quick as possible as you embark on a journey together."

Check out our Mercedes W10 reveal and shakedown gallery, here.