Renault in race against time for Barcelona test 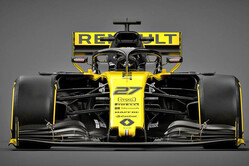 "In the video on their Facebook page, at the end is the new car... or at least last year's chassis with a new front wing on," one seasoned observer told Pitpass in the minutes following the 'unveil' of Renault's 2019 contender, the RS-19.

Sure enough, it has since been confirmed that the car 'revealed' to the media and fans today is actually the 2018 car fitted with the 2019 front and rear wings.

Indeed, team boss Cyril Abiteboul has admitted that such has been the desire at Enstone and Viry-Chatillon to maximise development time, the team is under pressure to be ready for next week's pre-season testing at Barcelona, hence the smoke and mirrors deception at today's launch.

"It's super tight," admitted the Frenchman in terms of the race to have the car ready for Monday. "But we still have good reason to believe that we will be able to test.

"If I share a bit of a secret, we are due to do a shakedown on Saturday, during a filming day, and that may or may not take place as we speak," he added.

When asked if the team will be ready to go on Monday, he admitted: "No. As we speak, we are 100% sure of nothing. There will be two drivers, they will be there if you want to have a chat and a coffee... we should have a motorhome and a coffee machine working, but that is as far as I am 100% sure!

"In the winter in Viry we got the team working on Saturdays," he revealed. "We cancelled holidays. We usually have a factory shutdown on week 52 before Christmas because that's the best way to optimize resources... we cancelled that."

The Frenchman admits that the delay is in part down to the team, and in part also to the late change to the regulations.

"Sometimes we are vocal about the late change of regulation," he said, "and this is the harsh reality of that late change. I believe that we are not the only team to be in that situation.

"We know that there is a direct connection between the time you are spending in the wind tunnel and how competitive you are," he continued. "We need to be constantly flirting with the red line, but we have maybe gone a bit over the red line. That is why my thoughts really are with production. We are massively working to get the parts ready for us to get them out of the door for us to be ready and testing.

"I think next year, we will have to be a bit more conservative because it is not just performance, it is reliability," he added. "You don't want to turn up and have to shakedown your car and realise that there is something that isn't working. It is a balancing exercise. We have been a step too far, and we will maybe have to review it for next year."