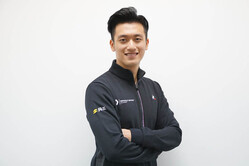 Renault has announced the recruitment of Guanyu Zhou as a Renault Sport Academy member for the 2019 season. The Chinese driver will also take on the role as the F1 team's development driver, working closely with the team at its base in Enstone.

His role will include driving the team's simulator and participating in engineering briefings, making him the first driver from the People's Republic of China to occupy a Formula 1 role with a manufacturer team.

Nineteen-year-old Zhou is one of China's most promising young drivers and has shown quick progress in his career. Hailing from Shanghai, China, he joins Renault from the FIA Formula 3 European Championship, finishing thirteenth in his first year and eighth in 2017 and 2018. He picked up two wins last season - in Pau and Hockenheim - as well as four further podium finishes.

He began karting as an eight-year-old and moved to London in 2012 to further his education and racing career. A year later he won the European Junior Rotax and ABKC S1 Rotax Junior Series.

In 2014 he was recruited to the Ferrari Driver Academy, at which point he moved into single-seaters contesting the ADAC and Italian Formula 4 championships before heading to the Toyota Racing Series in 2015 and the FIA Formula 3 European Championship in 2016. He remained in F1 in 2017 and 2018, albeit switching from Motopark to Prema, finishing 8th overall in both seasons. He will race in the FIA Formula 2 Championship this year with the newly-formed UNI-Virtuosi team.

"We're excited to reveal Guanyu as a Renault Sport Academy member and the team's Formula 1 Development Driver for this year," said Renault Sport Academy Director, Mia Sharizman. "Guanyu has shown his ability as an excellent driver in the competitive European Formula 3 Championship. We've been monitoring Guanyu for some time and we're very happy to sign him onto the young driver programme. In Guanyu, we have a hard-working, talented individual and we will be aiming to further develop him this season in the Formula 2 Championship."

"China is an important market for Groupe Renault," aded Chairman of Groupe Renault Asia Pacific Region, Senior Vice President of Groupe Renault China Operations and CEO of Dongfeng Renault Automotive Company (DRAC), François Provost, "so to sign one of China's best young racing drivers is very pleasing, since it will help elevate our brand awareness in China. This is a further proof to our strategy of ‘In China, For China,' as we believe it will give a strong boost to the development of motorsport in the country. We anticipate his joining will attract more people to Shanghai, which will witness the 1,000th GP of F1 in April this year."

"It's a huge honour to join Renault Sport Racing as an Academy member and the Formula 1 Team's Development Driver and I can't wait to get started," said Zhou. "Renault has big ambitions - both for the Formula 1 team and the Academy - and that's something which motivates me. I know the significance of Renault in China, so I'm especially proud to represent both Renault, as a brand, and China in the racing world. Formula 2 is the next step in my career. It looks to be a competitive field of drivers and there is going to be a lot to learn in a short space of time. I've been working hard during the winter and the three-days Formula 2 testing in Abu Dhabi was hugely beneficial. I'm looking forward to drawing on Renault's help and advice this season as I aim for success and trophies."