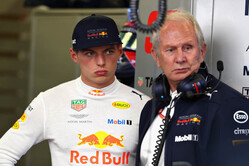 Seemingly Red Bull has learned little in terms of tempting fate. Having consistently made light of the fact that its 2017 contender was to be the RB13, the Austrian team poo-pooing all superstition surrounding the number, ahead of its new partnership with Honda it is forever telling the world how great things will be and how a significant corner has been turned after splitting with Renault.

For as much as Messrs Horner, Verstappen and Marko seemingly forever rubbished the French manufacturer, now barely a day passes without at least one of the Tyrolean team's triumvirate telling us how good things are going to be from here on in.

Today it is Helmut Marko's turn, as he reveals that gains from the Japanese power unit should put Red Bull in the "region" of Mercedes and Ferrari, which has accordingly led to a "real euphoria" and a "sense of optimism" in Milton Keynes.

"The figures make us really optimistic, also with regard to the increase in performance," he tells Motorsport.com. "For the first time we can also celebrate with a party mode!

"The Honda engine is already slightly above the Renault engine," he insists. "If you combine our GPS data with the data provided by Honda, we'll be in the Mercedes and Ferrari region.

"Of course they're not sleeping either," he admits. "But they are already at such a high level that they can no longer make such jumps. Even if we should be 10 or 15 kW behind, that was no different in our Renault era with the eight-cylinder engine. We can make up for that."

Using Toro Rosso as an expensive guinea pig in 2018, though Honda clearly made progress - certainly compared to its time with McLaren - the Japanese manufacturer hardly set the track alight, with concerns over reliability remaining.

"We are aware that it will probably be difficult with reliability," says Marko. "Most probably we won't be able to get through the season on three engines. But if you choose the right tracks, you can be back at the top in a few laps. That will be the concept, that we consciously accept engine penalties if necessary."

Finally, the Austrian seemingly couldn't let the occasion pass without a final dig at Red Bull's previous partner. Referring to claims that the Austrian team was seen as forever whining about Renault, he said: "We were in the B category right from the start. We lacked up to 70bhp in qualifying.

"Depending on the race track it became less," he added, "but on average we were always at least 40bhp behind. Our GPS data clearly shows how much we lose on the straights and how much we win in the corners. When the Ferrari power was at its peak, the difference was even more extreme."