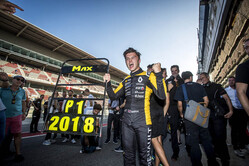 Renault remains one of the teams still keen to maintain a young driver programme, and as 2018 comes to a close, Cyril Abiteboul reflects on the progress of its participants over the course of 2018.

"It's been pleasing to see excellent results from the 2018 crop of Renault Sport Academy Drivers," he said, "a good reward for a lot of hard work and preparation behind the scenes.

"Developing a competitive Formula 1 package is one thing, but ensuring the most talented drivers are in the cockpit is also a critical ingredient and something Renault very much buys into. The young drivers currently coming through the doors at Enstone are the ones we expect to be in the race seats in the near future.

"There is still a bit of time before we see the team and young drivers fighting for world championships," he admits, "but the Academy is always discovering new ways to progress and grow stronger.

"We have been satisfied overall with what we've seen this season and how this success exemplifies the young driver ladder, which Renault has set out.

Looking at the highlights of the year, Max Fewtrell (pictured) won the Formula Renault Eurocup title, demonstrating consistency and a level-head at the right times to take the championship.

Christian Lundgaard pushed Max close in his rookie season in the Eurocup to finish runner-up. Overall, Max, Christian as well as Victor Martins, fifth in the series, were very impressive this season and join an elite list of names to achieve success in the highly-competitive Eurocup.

While the championship standings don't tell the whole story, it was great to see Sacha Fenestraz round off his season by finishing third place in the prestigious Macau Grand Prix.

Jack Aitken stepped up to Formula 1's premier support class alongside duties as third & reserve driver with the team. Jack can be proud of his achievements since developing through the Academy ladder in 2016, to driving a modern Formula 1 car in 2018.

Arthur Rougier and Sun Yue Yang have continued their development in the Academy, benefitting from the support and guidance outlined by the programme.

Finally, Affiliated Driver Anthoine Hubert won the GP3 Series championship after a classy season. Anthoine showed patience throughout the year and proved to be the most consistent driver at every round.

In the coming weeks and months, plans will take shape for 2019 and beyond. Decisions will be made as to who will drive in the black and yellow junior colours next season but, at this moment, the distant objective remains unchanged: Renault targets an Academy driver as a future Formula 1 world champion.

"I had positives this season like winning in Spain, the podium in Baku, qualifying on the front row in Hungary as well as running in the F1 car," said Aitken. "Quite often at race weekends, we've shown front-running pace, but not been able to convert that into more frequent podiums or wins. I've worked hard throughout the year to find solutions and that puts me in good stead for the future. I'm already looking forward to 2019. This year has been tough, but I've learned a lot and a season of having these problems will undoubtedly help me later down the line. I'll take the positives and move forward onto the next challenge."

"Overall, we've had a really good year and that's shown by winning the title," added Max Fewtrell. "It took a lot of hard work to get the job done, especially having to chase the lead throughout much of the season. To win the championship in that way makes it even sweeter as that shows our strong attitude to the job. We were always fighting at the front with wins at Paul Ricard and Silverstone, despite some frustration in Monza and Monaco. The three wins across the two German rounds proved vital and that accelerated us to where we deserved to be. We had the most wins, most pole positions and were the quickest car out there at most rounds. It was a rollercoaster season, but we knew we had the pace and that kept me calm when things got tough."

"My season was a lot better than I expected," said Christian Lundgaard. "We started out being prepared to fight for the rookie title and we progressed each weekend and realised we could be in contention to win the championship outright. I struggled a little bit in the mid-season and lost a bit of momentum through Silverstone, Monaco and Red Bull Ring. We picked things back up across the next two rounds at Hungary and the Nürburgring with two wins and some podiums, but then Hockenheim arrived and that weekend ultimately ended our title chances. The pace was so strong, but luck wasn't on our side and there was a 50-point swing to Max in the championship. I knew I had to win both races in Barcelona. I did half of that with a victory and a second place, but it didn't fall for us in the end. Finishing second was better than expected. This was my best season in racing so far and it beats being a double Formula 4 champion. I wasn't surprised by our success, I adapted quickly to Formula Renault, but next year is going to be a step up."

"It's been a good year, especially as we've been able to compete against a lot of competitors who have more single-seater experience than me," admitted Victor Martins. "The speed was there all season - sometimes the results don't show that - but that's promising heading into next year. We knew coming into the championship it would be challenging to learn a new car, new conditions and to get over any small mistakes like missing out on pole position in the qualifying groups. But it's with mistakes that you learn and that's necessary on the journey to become a champion.

"There have been plenty of positives. The two podium finishes in Monaco were amazing and also the pole positions at Red Bull Ring and Barcelona, where I took the absolute Formula Renault lap record. We had six podiums in total, two wins at Austria and Spa, so that was good. I have learned a lot this year, which will be beneficial for the rest of my career. I'm determined to become Formula 1 world champion and I will do everything possible to become one. Work for 2019 has already started."

"We've done it!" said Anthoine Hubert. "We had a goal this season and we can now say that we are the 2018 GP3 Series Drivers' Champion. It really feels amazing after putting so much effort into it. We had a great weekend in Abu Dhabi and we raced with the championship in our mind. We didn't need to do anything silly, or push too hard, and we just had to have a clean outing.

"It has been an incredible season for me, of course I want to say thanks to my team ART Grand Prix for the job they've done and Renault Sport Formula One Team for this first year of support. It has really helped me to grow and I'm sure I'll learn even more in the future with them. My target now is to move to Formula 2 so we're working on that."