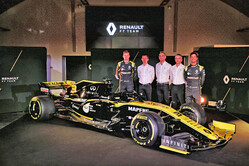 2019 is the fourth season of Renault F1 Team. How much has the team progressed since returning to the sport in 2016?
Cyril Abiteboul, Renault Sport Racing Managing Director: I'm genuinely proud of the team in Enstone and Viry. Three years ago, we created Renault F1 Team with an ambitious programme, but with realistic hopes. We knew we needed to rebuild many elements of the company: facilities, workforce but also the confidence of the team. We introduced an extensive rebuilding programme in Enstone with new buildings and new production tools, including a wind tunnel upgrade, a new ultra-modern operations room, new chassis machine tools etc. A huge recruitment drive has also increased our workforce by fifty percent. Efforts have been made at Viry as well, with new investments in engine dynos and also in construction of a new building due for completion next year aimed to rehouse all engine assembly.

Launching all these projects while participating in the championship was an incredible challenge as was getting the major points finished. The final commissioning of the investments was a tremendous achievement and I'm impressed by how everyone has taken to the task. This shows in the momentum we have gathered: ninth in 2016 with eight points, sixth in 2017 with 57 points and fourth last year with 122 points.

We go into this season aiming to keep this strong and measured momentum. We do not target x or y position or a number of points: what I want to see is that the team continues its positive trajectory. The added momentum of the Daniel-Nico partnership brings confidence to the team this season.

How much are you looking forward to seeing our driver line-up behind the wheel of the R.S.19?
CA: I can't wait, and this feeling is shared by the entire team. I believe we have one of the strongest - if not the strongest - driver line-up on the grid. Daniel brings proven race winning experience and knowledge of a top team, while Nico is hungry. He's hugely underrated - he's quick, determined and a team motivator. Individually they are very strong and I feel the two will complement each other extremely perfectly.

Having two experienced and talented drivers is another motivating factor for the team. The energy they have brought to the team is very tangible and I hope we can give them a car to show their considerable talent.

How much has Renault F1 Team changed in the past year?
Marcin Budkowski, Renault F1 Team Executive Director: The transformation at Enstone has been impressive and it matches our ambitions. We are putting the right tools in place for what we have set out to achieve. The change in infrastructure is visible with new buildings, older areas refurbished and new equipment commissioned. The design of the new offices and workshops has focused on every detail that can make a difference. Everything has been planned to ensure a smooth workflow. We have new flow measurement and analysis tools in the wind tunnel and a brand-new gearbox dyno that has recently been commissioned, improving our ability to develop the car. In modern Formula 1, all the small details add up, and that includes a better working environment for our staff that spend long hours at the factory.

What are the principal areas of improvement at Enstone?
MB: We've had a massive growth - almost 100 new staff over the last year and 250 since 2016. The challenge is to integrate these new recruits in the team, but also to evolve our organisation and ways of working to make sure we extract the most performance and efficiency out of the increased headcount.

What does Renault F1 Team do well?
MB: There's a good core of people at Enstone who have been here for many years and created a good team spirit and work ethic; that's a clear strength. The Enstone-Viry partnership is also very good having worked together for over 20 years. As a works team, having complete control over both chassis and engine is an advantage, and we are pushing this integration even further by making sure we approach a new car project as a whole with the two sides involved from the very early stages.

Tell us about the 2019 Renault F1 Team car, the Renault R.S.19?
Nick Chester, Chassis Technical Director: There has been significant evolution of the regulations, which were born from last season where cars couldn't race closely together due to large downforce losses in aero wakes. The main changes for 2019, after discussions between the teams and the FIA over the course of last season, are a 200mm wider and simpler front wing, a change to the front drums, lower bargeboards and a bigger, wider and higher rear wing with increased DRS. It wasn't a straightforward process in terms of interpreting the rules. We lost downforce in the early stages of the development. We've aimed to improve the overall packaging of the car, and notably to make the car lighter. We have a little more ballast to play with due to the minimum driver weight changing to 80kg.

What new resources has the team been able to harness for the creation of the R.S.19?
NC: The whole capacity of the team has come up. The current infrastructure is top-level with better machining centres for chassis machining where we can work to tighter tolerances. We've made improvements to the wind tunnel, we have a paint shop on site, which means we can push things later and still have top quality finish. The new clean room is fantastic, it's double in size from its predecessor, making composite lay-up more efficient and that's helping us push to get the car ready. All over the factory there have been improvements and at the same time we've been building the engineering capabilities of the team. We're still recruiting, enhancing our work processes and the organisation is strengthening all the time.

How much have the drivers influenced the development process of the car?
NC: Nico is very good to work with because he's clear with what he wants from the car. He knows the solutions we can give him that will make him go quicker. It's very good talking to Daniel, he's new to us and we're new to him but he's very open and his initial feedback is quite close to Nico's. What we're trying to put into the car should work for both of them. The closer they are with feedback, the easier it is to develop the car. It's an incredibly strong line-up. They are both quick, they work hard and have great feedback.

What has the team learnt from last year with its power unit development?
Remi Taffin, Engine Technical Director: We confirmed last year that the direction we were developing the engine was the right method and that meant we could continue our efforts into 2019. Viry has been very busy over the winter and we have worked as late as possible to embed as much performance and reliability. We have now built the test engines and we are about to sign off race engines. We're satisfied with what we've been able to produce. We've pushed on the pure performance element while also keeping a hand on reliability.

We've seen some major changes in Enstone this year, and Viry will undergo some major building work too. Can you explain?
RT: We are constructing a new building for all our operational activities in order to improve the fluidity of our organisation. We will continue working on our test tools, ensuring we have the right and most up to date technology. We have a new dyno that will be commissioned shortly, which is multifunctional and can test the gearbox with the engine, the engine on its own, the ERS on its own and the engine with the rear end of the car. We have to keep the future in mind in anticipation of 2021 and looking after our preparation for that.

What's the feeling within the team ahead of the season?
RT: We are beginning to see the benefits between the collaboration of staff across both sites in Enstone and Viry. On the surface, we have seen new buildings and tools put in place, but we can't forget the people at the heart of the project. There is a growing feeling that we can fight back at the top and staff are buying into that. There is no fear, we know we can do the job. We have people within the team who aren't shy of the challenge to compete at the top. We know we have what it takes to deliver. Having two strong drivers in Nico and Daniel brings even more motivation and people within the team are convinced they can do a very good job. It delivers inspiration for staff to have an idea and subsequently develop that idea to the race car as quickly as possible.