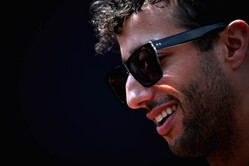 In all honesty, there are some conflicting comments coming out of Renault at present, not least Cyril Abiteboul's claim that the proposed budget cap will play into his team's hands because the big spenders will be preoccupied not only with how they reduce their budgets but the enforced redundancies that will follow.

To further confuse the issue, the Frenchman has effectively said his team will be 'standing still' until the cap is introduced, which is hardly the sort of talk to inspire Nico Hulkenberg and new teammate Daniel Ricciardo.

Exactly what it was that convinced the popular Australian to jump ship isn't clear, with most citing Red Bull's increasing shift towards Max Verstappen.

It is clear however that the Renault power unit is still no match for Mercedes and Ferrari, while the shortcomings of the entire package meant the French team was hard pushed to fend off Haas last season, while also benefiting from the trials and tribulations at Force India.

Though the details aren't known, along with the promise of an improved car and power unit this season, Ricciardo will have been tempted by a sizeable increase in salary. However, amidst claims the French team should have been improving its car before signing a proven race-winning driver, Abiteboul has defended the move.

"There is a considerable financial commitment from Renault," he tells Motorsport.com. "But it is not a question of whether Renault can afford it, it can definitely afford it as our turnover is forty times the turnover of Red Bull. There is no question about that.

"The question is about the value," he continues. "Does it make sense to invest that type of money in a driver at the level of Daniel at this point of our journey, with the car that we have and the other expense that we must do? We believe so.

"There has been some discussion about that. Would we be better off investing in to the car or the drivers? I think we have reached a point where we can invest in both reasonably."

Referring to whether the money spent on attracting the Australian will mean 'cutting back' elsewhere, he said: The commercial arrangement with Daniel is extremely sensible and nowhere near what can exist elsewhere in F1.

"It is obviously commensurate to the level of his skills and talent, and what he can bring to the team. But it is not a stupid amount of money. I think it has all been done in a sensible way, and it is not in a way that will be detrimental to the team who can keep on spending on the development of the car and the engine."