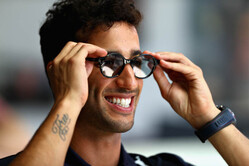 Continuing with the oft-used 'bad marriage' analogy used in terms of Red Bull and Renault - or indeed McLaren and Honda – it's fair to say that most divorce courts would agree that the French manufacturer contributed to the success of its Austrian partner.

Though the introduction of the hybrid formula - which Renault strenuously pushed for - didn't go quite the way things planned, there were a few wins along the way.

However, like many marriages that don't work, by the end things were getting spiteful, particularly from Milton Keynes.

Other than the non-stop rhetoric, Red Bull, still smarting from the loss of its adopted son, Daniel Ricciardo, to its former partner, opted to put a block on the Australian testing with his new team at the post-Abu Dhabi test in November.

However, rather than admit frustration, Renault, keen to put its former partner's nose even further out of joint, is playing up the positives of the snub, suggesting that Red Bull is running scared.

"There's always things that you learn from the interaction with a driver," says Renault's executive director Marcin Budkowski, according to Motorsport.com. "He's been in the simulator, he's been with the engineers.

"It's difficult when he hasn't driven the car," he admits. "We would have loved him to drive the car in Abu Dhabi but we couldn't make that happen. We're disappointed that we couldn't get his feedback on last year's car because it would have been very useful to us.

"The fact it didn't happen, without pointing fingers, is quite flattering to us," he adds, "because it means other people are afraid of us and don't want to give us anything that could be a competitive advantage."

Turning his attention to Ricciardo, Budkowski continues: "He is a proven race-winner, he is bringing us an experience that we don't have in the team today," a clear reference to teammate Nico Hulkenberg who has yet to make it to the podium..

"He has been working with a top team for a number of years, so he will bring us some understanding in terms of direction and development of the car, of set-up of the car, which is useful learning for us.

"It has been a huge motivation boost for everyone at the team to have someone like Daniel coming, obviously because he is Daniel, the driver and person he is. But also a race winner, from a team that is challenging for wins and potentially the championship, believes in our project and joins our organisation at this stage. That says a lot about the project and says a lot about what we are trying to build here and it all goes together."