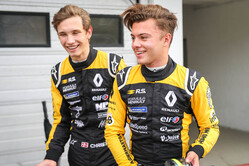 As the Renault Sport Academy (RSA) enters its fourth year, three familiar faces remain from 2018 and two new drivers are added to the line-up.

Launched in 2016, the RSA aims to find and nurture young racing driver talent and progress such prospects through the junior racing ranks all the way to Formula 1. Renault's goal is clear: for an RSA driver to be in Formula 1 and become world champion with the team.

Drivers are selected for the academy based on their talent and potential shown in karting and junior championships. Renault is able to draw upon its global markets and racing acumen to scout standout, young racers. For 2019, the academy will draw benefits from the development of the Formula 1 team, further strengthening the ties between both programmes.

Three familiar faces remain with the academy as Max Fewtrell, the Formula Renault Eurocup champion in 2018, Christian Lundgaard (pictured with Fewtrell), runner-up to Max, and Victor Martins are retained from last season. GP3 Series champion Anthoine Hubert steps up his role from affiliated driver in 2018 to academy driver for 2019.

Anthoine (Arden) and Guanyu (UNI-Virtuosi) will go head-to-head in the F2 championship this year, while Max and Christian (both ART Grand Prix) will race in the new FIA Formula 3 Championship with Victor (MP Motorsport) and Caio (R-ace GP) going wheel-to-wheel in the Formula Renault Eurocup.

"We're extremely pleased to finalise the 2019 line-up of the Renault Sport Academy," said Renault Sport Racing Managing Director, Cyril Abiteboul. "All six drivers have shown themselves to be exciting talents in the junior categories and we look forward to working with them in 2019; both to aid their career progression and benefit the Formula 1 team. Renault is able to utilise its global markets to discover home-grown talent and potential and the 2019 line-up is a reflection of that.

"The Academy has been an excellent resource over the last three years and will continue to be beneficial for many seasons to come. For Max, Christian, Victor and Anthoine – already familiar with the Renault family - it's about continuing the hard work behind the scenes and meeting their objectives. We're especially pleased to welcome Guanyu and Caio to the team and will be doing everything to help them, along with the retained drivers, enjoy rapid success."