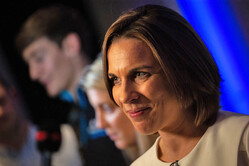 Though her father founded his team in an era when, other than being able to buy a ready to race car from the likes of March or McLaren, one was able to build one's own, install a Hewland gearbox and Cosworth and go F1 racing, such concepts are a distant memory today.

Now, there are strict rules about the sharing of components, though in the last couple of seasons attitudes have appeared to become more relaxed.

At a time Ferrari shares much of its technology with Haas and Alfa Romeo, and Red Bull is establishing an even closer relationship with its sister team, Toro Rosso, Claire Williams believes the practice is "diluting" the spirit of F1.

Under the current rules, certain parts, referred to as listed, must be designed and manufactured by the teams themselves, whereas non-listed parts can be brought in from other teams. Williams is hoping that the rules overhaul planned for 2021 will address this.

"It's not easy currently with the way the regulations are for truly independent constructors to compete," she said at the unveiling of her team's 2019 livery.

"That was probably one of the reasons we slipped back to P10 last year, based on the work going on between certain teams," she continued.

"However, that falls within the existing regulations," she admitted. "One of the reasons we're so supportive of the work the FIA and FOM are doing at the moment is in order to rebuild the parts list. We're very much advocates of that. We know that will change the landscape of F1 in 2021 and beyond to enable teams like our teams.

"We're incredibly proud of the fact we're true constructors in the sense we make all of our race cars in-house ourselves," she insisted. "Personally, that's the DNA of F1. It shouldn't be diluted by a diluted listed parts list.

"I'm very much looking forward to that change coming on board."