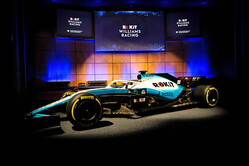 Only a day after Renault boss, Cyril Abiteboul, admitted that his team will almost certainly have to cancel a planned shakedown (filming day) this weekend in order that its 2019 contender is ready for the start of pre-season testing on Monday, Williams has announced that it has had to cancel its shakedown.

"As anyone would expect, we have had an extremely aggressive engineering programme over the winter," said Claire Williams in a brief statement this morning.

"As such, we have taken the decision not to run our car during our filming day this weekend in order to allow the team to maximise the time at the factory before we head to Barcelona for the first day of the test on February 18."

Speaking at yesterday's launch of its 2019 car - which was in fact the 2018 car with 2019 front and rear wings - Abiteboul admitted that his team was in a race against time to be ready, in part down to the team, and in part also to the late change to the regulations.

"Sometimes we are vocal about the late change of regulation," he said, "and this is the harsh reality of that late change. I believe that we are not the only team to be in that situation.

"In the winter in Viry we got the team working on Saturdays," he revealed. "We cancelled holidays. We usually have a factory shutdown on week 52 before Christmas because that's the best way to optimize resources... we cancelled that."

There were signs before yesterday that some teams are struggling to be ready, hence the move towards livery launches that they hope will distract from the fact that the new car isn't being shown.

Last week, while unveiling its new livery on a 2018 car in London, Haas released photographs of its 2019 car sporting the same livery. Meanwhile, Toro Rosso opted for an online unveiling that consisted merely of photographs.

Now, Renault and Williams have confirmed that there is an issue, and as Abiteboul says, it is likely they are not alone.

With pre-season testing limited to eight days, and new aero regulations having been introduced, the teams will need as much track time as possible before the season opener in just over a month.