Verstappen: It's not about lap times 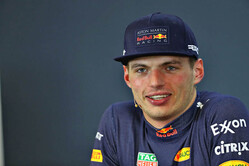 Though his teammate gave a glimpse of Red Bull's hand on Tuesday, Max Verstappen insists that testing is not the place for fast lap times.

Talking to his own website, when asked if he has pushed the RB15 to its limit yet, the Dutch youngster was adamant.

"It's not that you are cruising around the track putting in the laps," he said. "During qualifying, you take it to the limit to get the best out of it.

"But now I watch the limit so I am able to put in the laps," he continued. "If you have damage, you lose a minimum of one or two hours, and that's not what you want as well. It's also not about the lap times."

With that in mind, not to mention the nature of the Barcelona track and other aspects, such as temperatures, he insists that it is wrong to start making comparisons to Mercedes and Ferrari at this stage.

"We need to wait and see," he says. "In these conditions you can of course go very fast here, but in Melbourne it could be completely different.

"That is a street circuit with many bumps, low grip and different downforce levels. Other circuits therefore have no relevance whatsoever."

Reflecting on the first week of testing, in which he and his teammate completed 475 laps, the fifth highest amount, he talks like a veteran: "As years go by, you know more and more what to look for during such a test. It's about lap times. The most important thing for me is that we are able to put in a lot of laps, we are able to test every part and also see if everything stays intact."

"It also doesn't matter if you're running with a heavy fuel load or not," he continues, "because you are quite quickly able to see where things can be improved.

"That is one of the things we are now busy with, also with finding a good balance in the car. Unfortunately with the new wings it is not that easy to get that sorted out. Besides that I also focus on myself. Meaning that I make sure that I am comfortable in the car and don't have any pain or any discomfort."

Asked what the team will focus on this week, he responds: "We will be looking at where we can improve the car. That can be by trying out different set ups than the one we had last week.

"You then get an idea in which direction you need to go. In the background, they're also constantly busy tackling the aerodynamics to see what can be improved."

Comparing the main differences between the RB15 and its predecessor, he says: "The biggest difference is actually the seating, that's a bit different now, as I tend to be more in a lying position.

"The wing also is of course a bit more sensitive, because it's slightly less optimal for the air flow to the rear. Apart from that, there are only some minor things."

And the Honda engine...

"Yes, it's much nicer," he says. "Everything runs a bit smoother. It's maybe not obvious from the outside, but I don't notice anything while I am driving."

Having mentioned the new wings a couple of times, he is asked about driveability.

"I don't think there is anything wrong with the rear wing," he says, "I am now better able to look in the mirrors. It actually looks a bit more butch now.

"I do think that you will witness quite some front wings being damaged this year at the starts," he warns, "because of them being as wide as the wheels are."

And the $64,000 question in terms of whether those new rules will aid overtaking... when asked if they will lead to more overtaking, the youngster is adamant.

"No," he replies. "When I am trailing someone, I still have a lot of turbulence and when you look at the lap times, you see that we are still going tremendously fast again as we normally did.

"I think that the FIA and FOM never expected to us being able to get back up to speed again so fast," he admits. "Engineers are very smart and are more than able to circumvent a problem and, like in this instance, find downforce again somewhere else."

"The wing is more sunken, causing the DRS-effect to be much bigger. But it still depends on the circuit how big that is. In Australia and Hungary it will be more difficult than in China, where you can race beautifully."