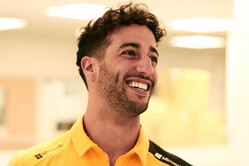 From the moment Daniel Ricciardo announced his intention to leave his spiritual home of Red Bull for Renault, much like when Lewis Hamilton said he was leaving McLaren for Mercedes, there has been widespread belief that the popular Australian was effectively throwing his career away.

While nobody expects Renault to come good the way its German rival has done, many insist Ricciardo would have been better served by staying put.

While Messrs Horner, Marko and Verstappen continue to talk up their new partner the fact is that the progress of the Japanese manufacturer remains one of the great unknowns, though more should become apparent over the next couple of weeks.

On the other hand, on the back of a dreadful run-in to the 2018 season, which featured a woeful number of technical issues, many fear Ricciardo has jumped from the frying pan into the proverbial fire.

Not so, insists the Australian.

"At Red Bull, you always measure yourself against the successes that have been achieved in the past," he tells Germany's Motorsport-Total, "and the danger is that you will be disappointed.

"My impression is that the risk of failing was greater than switching here and being at risk of not winning.

"Renault is not there yet in terms of where it wants to go," he added, "the team has been catching up and mistakes are likely to continue, but my impression is that these mistakes are being phased out, and my personal feeling tells me Honda has more problems to solve."

Meanwhile, the Australian has admitted Max Verstappen was also a factor in his decision, claiming that the way the youngster escaped censure after his actions in Baku - which saw both drivers eliminated - was a clear sign that he is the team's chosen one.

"We both got a talking to, putting it politely," he told Autosport. "But in my eyes, I guess the incident itself was, I felt like I was not really in the wrong even though I was the one that hit him. I think most people saw his double move.

"Even before that, there was a lot of contact and I think a lot of people thought it went on too long," he continued. "I guess the way it was handled at the time didn't sit too well with me, so that was like a little thing that bothered me.

"I couldn't tell you how many little pieces made up the puzzle, the kaleidoscope, but I guess that was one of the little pieces," he admits.

However, Ricciardo was at pains not to point the finger at his former teammate personally, insisting that the Dutch youngster is not a political animal.

"I don't necessarily think Max was political," he said. "Max is Max. Even now, and I don't need to be careful with what I say, the relationship was actually pretty good.

"Look, some of the flamboyancy with Max, that is just with age as well, and I guess from that point of view I would expect less with Nico just because it is a bit of an age gap and maturity. Nico has been around the block plenty of times.

"But going back to Max... I don't think he was political. It was fun."