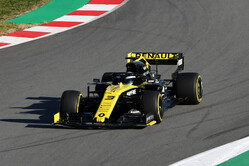 Having been prevented from driving for his new team at the post-Abu Dhabi test, Daniel Ricciardo finally made his Renault debut today in a shakedown of the RS19 at Barcelona.

The outing not only represented Ricciardo's first appearance at the wheel for the French team, but also the first appearance of its 2019 contender, the car 'unveiled' earlier this week having been a 2018 car with the latest-spec wings front and rear.

In taking to the Barcelona track, Renault becomes the sixth team to have shaken down its car ahead of testing which gets underway on Monday.

On Wednesday, Mercedes, Red Bull and Toro Rosso were all on track, while Alfa Romeo was in action on Thursday - appropriately sporting a Valentine's Day-themed livery - with Haas in action at Barcelona yesterday.

"I'm happy to get a first taste in the RS19 today, and I'm looking forward to pushing on and learning more with the team over the next couple of weeks," said the Australian after completing 21 laps.

Today's run, which forms part of the two days each team is allowed for filming purposes, appears to end any doubts that Renault would be ready for Monday's test.