Q&A with Hulkenberg and Ricciardo 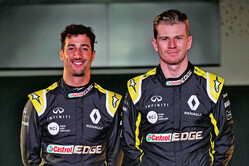 Nico Hulkenberg and Daniel Ricciardo talk about the RS19 and their hopes for the new season.

How have you spent the winter preparing for your ninth season in Formula 1?
Nico Hulkenberg: I've been working as hard as ever throughout the winter to be best prepared for the season. I've been doing the usual kind of things, taking a holiday over Christmas and New Year, and after that it was back to the physical preparation and intense training to get the body and mind back in tune.

What are you expecting from your third season with Renault F1 Team?
NH: As a team, we've developed a lot since the start of 2017 and that's all part of the process if we want to achieve our long-term targets. When I arrived, the infrastructure was still young, we've come a long way since then with a lot of progress from that point.

Are you impressed from what you've seen of the Renault R.S.19?
NH: I've seen parts of the chassis at Enstone and there's been a lot of hard work from the staff across both sides of the Channel to put together a good package. I know what we're doing and what's been changed, so I can't wait to see it and try it out. A driver always wants more power, more grip and a better balance from the car.

How well do you know your new team-mate Daniel Ricciardo?
NH: Daniel is a good guy and I've known him for many years from racing in Formula 1. He also lives in Monaco so I see him from time to time there. We both enjoy playing tennis and we've met up for a game on a couple of occasions. We get on well and we've always had a good relationship. We're a strong line-up, driving for a strong team so we're aiming for things to click, go smoothly and target a good season.

What are your personal targets for the 2019 Formula 1 season?
NH: I always aim to perform at my very best. I want to extract the best from myself and maximise the potential from the team and the car. The important thing is, as a team, we take a good leap forward and perform better consistently. We want the trend to continue upwards and keep the developments coming.

How excited are you to get behind the wheel of the Renault R.S.19?
Daniel Ricciardo: It's always exciting to get behind the wheel of a new race car and begin a new season. 2019 will feel different because I'm jumping into a totally new car and a new team. There will be a lot to learn; understanding a new steering wheel, sitting in a new seat with new mechanics strapping me in and a new engineer talking to me, but that whole process is an exciting prospect. Obviously, I'd love for the R.S.19 to be the fastest car on the grid, but for now, I want to see progress on the engine from last season and ensure the team remain motivated.

What, in particular, will you bring to the team?
DR: I'm here to do a job on track and drive as fast as possible. I would like to bring the team energy. I want to put a spring in everyone's step because that's also part of my job and also my character. I aim to be able to get the team to work that extra bit harder, put in more effort and rally everyone together. I want to be a catalyst for positive energy.

Are you looking forward to being part of Renault's racing spirit?
DR: I love racing and that's what I've been doing my whole life. Renault has a massive history in motorsport, so to be part of the next step of their Formula 1 journey is an exciting challenge. People are looking forward to having me on board and I think Nico and myself will be a really good pairing to push the team onto the next step. I'm optimistic as the team will keep growing even more after impressive progress since 2016. I want to be part of this progression to score podiums in yellow.

What do you know of your new team-mate, Nico Hulkenberg?
DR: I know Nico relatively well, through racing as well as living in Monaco. We're a similar age and we've been around the same Formulas growing up. I rate him as a driver, I always have. He has won pretty much everything in the junior championships and that underlines his ability. I've always held him in high regard as a competitor and I'm looking forward to having him alongside me.

Will there be anything different about you in 2019?
DR: Last year we had some highs and some happy moments. There were also some points of frustration. I was craving a change and everything I learnt in 2018 will make me a better version of myself in 2019. The difference will be a more mature person. I have more clarity of where I'm going and I aim for that to be shown with good results on track. I feel a lot of positive pressure and expectation to do good things, but that's something I'm looking forward to taking on.