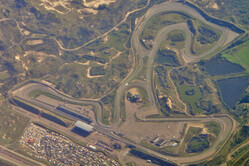 At a time both Zandvoort and Assen are understood to be under consideration for a Grand Prix, the Dutch sports minister, Bruno Bruins, has told MPs that there will be no government funding for a race.

Both circuits are understood to have asked for an annual €5m (£4.4m) contribution from the government as they, and the sport's powers-that-be, seek to take advantage of the 'Verstappen effect' on F1.

While admitting that a Dutch Grand Prix would be highly popular, Bruins said that the government could not invest as it would not be a justifiable use of taxpayers money.

Citing the fact that other sports manage without government funding, Bruins also made clear that F1 does not fit in with sporting initiatives aimed at influencing people, and in particular children, to get involved in physical exercise.

Meanwhile DutchNews.nl claims that Formula One Management (FOM) "has reached an agreement in principle with Zandvoort to stage a Grand Prix in 2020, 2021 and 2022, which would appear to rule out a deal with Assen", and, according to RTL Nieuws, Zandvoort has until March 31 to sort out the finances.

While there has been talk of a return to Zandvoort for some time, the circuit having hosted the Dutch Grand Prix on thirty occasions between 1952 and 1985, in February last year it was revealed that Liberty Media, via Formula 1 Licencing BV, had filed a trademark application for the Dutch Grand Prix.

The application, which was filed on 30 January, is for full rights to articles and services, which refers not only to the event but related merchandise, and came just weeks after FIA race director Charlie Whiting had visited Assen, more noted for its 2-wheel racing.

Following a visit to the seaside track in October, Whiting admitted: "I think there's great potential there. A few things need to be changed, and there's a great willingness to change.

"There would be a nice long straight good enough to use DRS well, and you'd maintain the historic elements of the circuit as well. I think it would be a very nice circuit."

Asked if the track would need to be modified, Whiting replied: "Not a lot.

"The amount of work is relatively minimal," he added.

"I went to look at it from a safety point of view," he stressed. "Could the track be modified to cope with modern F1 cars? That's all. How big the paddocks are, access, where you are going to put spectators is not something that I would get involved in normally."

A month after Whiting's visit, Dutch media reported that FOM invited the owners of the Zandvoort to make a proposal to host a race from 2020.

The Telegraaf, quoted Prince Bernhard, one of the owners of the circuit, as saying: "If we sign now, then in 2020, the Netherlands will again stage a Grand Prix, with Max Verstappen. Everyone involved is aware that this is a unique opportunity."