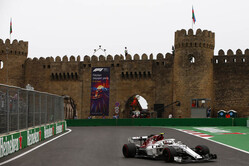 According to the press release, "the day's proceedings got off to a great start when Mr. Carey was joined by Azad Rahimov, Minister of Youth and Sports of the Republic of Azerbaijan, to put pen to paper on a three-year contract extension that will see the Formula 1 Azerbaijan Grand Prix remain on the F1 calendar until 2023. With the current agreement up for renewal in 2020, today's announcement was welcomed by all parties and ensures that one of the most popular races in Formula 1 will continue to excite motorsport fans around the world for the foreseeable future."

"This is a truly proud day for all of us," said Rahimov as he celebrated the extension of the contract. "The last few years have been a dream come true for the people of Baku as we have seen our race weekend grow from a simple idea into one of the most dramatic and exciting race weekends in F1's history. Already, we have played host to some of the sport's most iconic moments. Furthermore, every year we have seen more and more fans from all over the world attend the race and have been overwhelmed at how well our event has been embraced by the global Formula 1 community. I would also like to extend my special gratitude to Mr. Carey and everyone at Formula 1 for proving themselves to be such great friends to our race. This new agreement will allow our race to maximise its commercial revenues through increased fan-engagement activities and a brand-new sponsorship approach to engage our local and regional businesses with Formula 1's global platform. With these exciting opportunities in mind, extending our contract was never in question and we are delighted to stay in this wonderful sport for another 5 years at least."

"We are very pleased to have renewed this agreement which will see the Azerbaijan Grand Prix feature on the Formula 1 World Championship calendar for many years to come," added Chase Carey. "In just a short space of time, this race has become one of the most popular of the season, always producing closely fought and spectacular racing. The Republic of Azerbaijan provides a really excellent welcome to everyone in Formula 1 and the beautiful city of Baku is an amazing backdrop for the greatest motor racing show in the world. All fans of our sport should make a note in the diary for the 28th April, the date of the Formula 1 Azerbaijan Grand Prix 2019."

Again, according to the press release, "also representing the sport's governing body alongside Mr. Carey, was Formula 1's Senior Manager of Promoters and Business Relations, Emily Prazer. She was joined by BCC's Executive Director, Arif Rahimov, CEO of the Azerbaijan Tourism Board, Florian Sengstschmid and Heineken International's Sponsorship Lead for Formula 1 & Formula E, Ben Pincus. Together they formed a lively and highly experienced panel discussing the beneficial impact of hosting major sporting events in new markets and the Formula 1's position as a global brand platform.

"The symposium organised in association with the American Chamber of Commerce in Azerbaijan - now in its third year - was attended by over 200 delegates and also featured stellar contributions from high-profile representatives including key figures from within the Azerbaijani government as well as its business, technology and travel industries."

At a time 16 of the current 21 promoters have signalled their unease with the direction in which the sport is being taken under its new management, it is only understandable that Carey is "pleased" not only to have Baku on board but extending its contract.

However, let's not forget that just weeks after Liberty bought F1 in 2017, Liberty Media's chief executive Greg Maffei pretty much rubbished the event.

BBC Azeri quoted Maffei as telling a conference in Florida that the Azerbaijan event "does nothing to build the long-term brand and health of the business."

Admitting that the driving force behind finding new hosts and events had previously been: "How much can I extract? How much upfront?", he continued "So we end up with races in places like Baku in Azerbaijan where they paid us a big race fee but it does nothing to build the long-term brand and health of the business.

"Our job is to find partners that pay us well but also help us to build the product and it is incumbent upon us to bring best practice," he added.

With Vietnam the only new event introduced under the new management - an event that Bernie Ecclestone turned down - one is tempted to ask Mr Maffei how he thinks that last comment is working out.