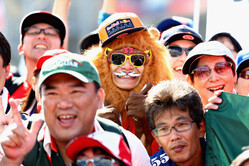 "I don't know why people want to get to the so-called 'young generation'," said Bernie Ecclestone in 2014. "Why do they want to do that? Is it to sell them something?

"Most of these kids haven't got any money," he added. "I'd rather get to the 70-year-old guy who's got plenty of cash."

On buying the sport at the beginning of 2017, as its new owners quickly shuffled its former supremo off the stage, along with claiming that his management of the sport was "dictatorial", they pointed to comments like that and said the sport was missing out, vowing to target younger viewers and fans.

However, two years down the line, despite all manner of initiatives aimed at attracting a younger audience - including streaming races, the introduction of an eSports series, the sport's first ever dedicated marketing campaign and seriously upping its social media presence - it appears to have failed.

"The average age is higher in more established markets like the UK, Italy and Germany," he adds, "whilst it is youngest in newer F1 markets like USA and China."

Roberts, who has a ten-year career in sports research which began in 2008 when he joined Eurosport as head of research, was recruited by Liberty in June 2017, just a few months after it purchased F1.

While the likes of Chase Carey and (commercial boss) Sean Bratches talk a lot but say little, Roberts gives great insight, so much so that fans participating in the AMA thank him for his candour at a time his bosses appear to rely solely on marketing-speak soundbites.

Of course, his openness, while delighting fans, may not be so well received at F1 HQ, as he gives the lowdown on a couple of initiatives that appear to have failed spectacularly.

Referring to the 'Engineered Insanity' marketing video for the sport, he reveals that the response to it "was actually positive and above the industry norm.

"The one problem was that not many people saw the ad which we need to improve next year," he admits. "The reality is that outside of avid fans, not many casual or non F1 fans saw the ad."

This will come as a blow to the much-hyped marketing department, which was put in place shortly after Liberty's purchase of the sport, and is headed by Ellie Norman. Norman, who was hired in 2017, was formerly head of advertising and sponsorship at Virgin Media having previously spent seven years in marketing and communications roles at Honda.

In an interview with Reuters in March last year, she said the aim of the Engineered Insanity campaign was to develop it over the course of the season in order to make it more relevant.

"One example would be that in-between every race there is a new edit," she said, "a 30-second piece of film that is created that starts to take the key moments from the race before and plays that back almost as a snapshot. It's literally to keep people engaged with Formula One."

In another interview, having claimed that the campaign had got off to a successful start, when asked what type of content gets the most engagement with F1 fans, she said: "Some standout pieces are always the team radio best bits edit after the race, the Engineered Insanity marketing campaign, and the race wrap up in 60 seconds".

As for the sport's much-hyped ramping up of its social media presence, Roberts reveals that too may have slightly misfired.

"The most discussed thing about the Austin GP last year was Taylor Swift's concert!" he reveals. "I know it's worrying!" he adds.

Despite the worrying demographic, Roberts also reveals that the sport hasn't given up on attracting younger fans. Asked "can you release toys [merchandise]? Like die cast, [radio controlled] car, figurine, track, of F1 team/car? Or you can't do that because its team exclusive right?" He responds: "funny you should say this. This is being looked at for 2019."

"We are about to embark on a strategy to try and appeal to younger fans (and the fans of the future)," he says. "We know that digital, social and things like eSports and fantasy are going to play a big role in appealing to this generation. We feel we are moving in the right direction but we still have a long way to go.

"Of course it is important that we don't alienate our older viewers in pursuit of these younger fans as they will have been fans for many years and are more likely to sit through the 2 hours race," he adds.

On purchasing the sport, F1's new bosses wasted no time in criticising Ecclestone, stunned not only at the lack of a dedicated marketing department, but that almost all of the sport's deals were done by the man himself, often on a handshake.

In January 2017, Chase Carey, when asked about key revenue streams, said: "Probably the one to grow the fastest is sponsorships. Realistically today we have a one-man sponsorship operation. There are many categories we are not selling into. We have signage at tracks we're not selling. Putting an organisation in place that enables us to execute on that probably is the most immediate impact."

Fast forward to November 2018, and the American admits: "The perception was just there are sponsors waiting... They were lined up out there and as soon as we had somebody to go call on them, they were just going to sign up. The world's not that simple."

"We hope with all the investment and the change in management, this will help encourage advertisers back to the sport," says Roberts, though, following his revelation in terms of the sport's demographic, this will surely have the opposite impact on advertisers.

Though it is claimed TV viewing figures in the UK could crash by 5 million next year when Sky has the sole rights to live broadcasting of the sport - other than the British GP - Roberts disagrees.

"Channel 4 will have the highlights next year and we have worked with them to ensure they show the races in a favourable prime time slot. We estimate that we will actually have more viewers next year in the UK (thanks to this prime time slot) than we had this year. We do appreciate that many of these viewers will be watching only highlights though."

However, he thoughtfully adds: "The problem with podium interviews are that 70% of viewers have switched over by then."

And for those hoping for coverage of pre-season testing, he admits that this "will not be shown on TV is because broadcasters have not expressed interest in showing it as many feel they can get bigger audiences in the slot with other content. Sky used to show it but hardly anyone watched it so they stopped broadcasting it."

And as Liberty insists on making the sport appear more 'trendy', it's worth noting that in the first year under its management the sport's sponsorship haul only increased by £8.5m ($11m) - less that any year in the previous decade - while over that same decade the total number of viewers crashed by 41.3% to 352.3 million as F1 signed more Pay TV contracts.