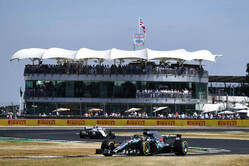 While the teams use social media to relentlessly count down the days to the new season - and attempt to sell their remaining 2018 team kit - race fans in the UK will be only too aware that 2019 could well be a watershed year in the sport's British history.

Already facing the prospect that the British Grand Prix at Silverstone could be the last, from next season fans in Britain will only have access to live broadcasting of one race... that at Silverstone.

While Channel 4 will show live coverage of the British Grand Prix, unless you have the relevant subscription to Sky, all other races will be available in highlights only format.

As we previously reported, the teams could veto the move as their contracts stipulate that F1 cannot disappear behind a pay-wall in certain major markets, of which the UK is one.

However, with the cash flowing in from deals such as Sky and Sky Italia - both of which are paying significantly more next year than what they paid in 2018 - it is unlikely they will raise any objection.

After all, the income from TV broadcasters is the second biggest source of revenue, contributing 33.7% of the £1.8bn it made last year. The higher the revenue, the greater the profit, which is just what the teams want to hear as they receive 68% of F1's profit as prize money.

Indeed, over the five years to 2017 the teams' share rose 15.2% to £727m. This at a time the Formula Money Sponsorship Database reveals that team sponsorship revenue has fallen by more than 25% in the last five years.

For obvious reasons, Pay TV channels have lower audiences than their free-to-air counterparts, which goes some way to explaining why the sport's global TV audience fell 21.7% to 352.3m over the five years to 2017. Indeed, as Chase Carey confirmed only last month, "television viewing on race day year-on-year is down 5%, however that is largely due to our move from free to Pay TV in Italy".

Though F1 releases data showing TV audiences in major markets, it doesn’t break the data down into different networks, and this is key to forecasting the potential impact of the move to Pay TV in Britain next year, which is likely to be driven by the reduction of Channel 4’s live broadcasts as opposed to Sky’s coverage which will largely remain the same.

According to Forbes, detailed analysis of Channel 4’s audience gives an overview of the potential damage that might be done by placing all but one race behind a paywall in the UK.

The Broadcasters’ Audience Research Board (BARB) - which is owned by six networks, including Sky, Channel 4 and the Institute of Practitioners in Advertising (IPA), the trade body for advertising, media and marketing agencies in Britain - collects and collates all TV ratings in the UK. Its data is highly-regarded and is widely referred to as the ‘gold standard’, hence it is the official estimate of TV viewing which British networks use to sell advertising spots.

The data is sold by data bureaux however this requires relying on a third party. Luckily however, this isn’t necessary to analyse Channel 4’s F1 viewing trends as the core data is buried deep on BARB’s website and has the organisation's seal of approval.

BARB’s website lists the top 15 programmes each week and the results can be refined down to individual channels. This year, all but three of the races made it into the weekly top 15 on Channel 4 giving a clear indication of the viewers for live broadcasts compared to highlights.

Of the ten live races, the Japanese Grand Prix is the only one which lacks data as it was broadcast early in the morning in Britain. Nonetheless, it clearly had the lowest audience as it didn’t even make it into the top 15 programmes, and the bottom-placed programme that particular week had 1.23 million viewers. All the other live races on Channel 4 had larger audiences than that rising to 3.08 million for the United States Grand Prix.

According to BARB's data the average for the nine live races for which data is available is 2.65 million, which is around the same as the highest audience of all the highlights shows, Italy taking pole with 2.65m.

Indeed, with less than 1.24m and 1.27m respectively, the Mexican and Brazilian races didn't even make it into the top 15 for their respective weeks, these two events attracting the lowest highlights audience of the season.

Multiply the 580,000 by nine - as Channel 4 loses nine races next year (but keeps Britain) - and the sport faces the loss of around 5.2 million viewers.

Admittedly, some UK fans may make the switch to Sky, but it is not expected to be a significant amount for other than the various reasons for not wanting to pay the broadcaster, the fact is that with half the season only available in highlights for for the last couple of years, most who were going to make the switch would have already done so by now.

As ever, the bottom line is money, and though the subscription broadcasters are currently willing to pay the big bucks, the corresponding fall in sponsorship will soon have an impact.

It's a big gamble for F1, which has its HQ in London, and the teams, seven of which are based in the UK, and only time will tell if it is a gamble worth taking.

The opening races of the season are going to be vital for sport, for if the new regulations fail to produce the close racing that has been promised, and if Lewis Hamilton and Mercedes appear to be heading to their sixth titles, few of those used to getting their (limited) races live for free are going to be convinced to pay out for more of the same old.