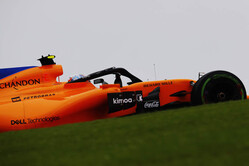 According to a ground-breaking new sponsorship database, F1 team sponsorship revenues have fallen by more than 25% in the last five years.

Although the drop was partly accounted for by a reduction in the number of teams from 11 to 10, this was not the main factor in the decline as the average sponsorship haul per team also fell by over 18%.

The findings reflect the concerns of several team bosses who have admitted that it is increasingly difficult to find sponsors in a climate where traditional properties such as sports teams are competing against social media.

Although total team sponsorship was up by 11% on 2017 - driven by Sauber's new title sponsorship from Alfa Romeo and Aston Martin's expanded deal with Red Bull Racing - it was still the second lowest annual total since Formula Money started assessing sponsorship values in 2005.

Launching today, the Formula Money Sponsorship Database marks the first time ever that Formula Money has made full access available to its vast database of sponsorship and team owner spending figures from 2005 onwards.

Formula Money calculates that in 2018 198 companies fuelled 229 team sponsorship deals, with an average value of £2.71m ($3.4m). The biggest of these deals was Malaysian oil giant Petronas's title sponsorship of world champion, Mercedes, at an estimated annual £59.8m ($75m).

However, this did not make Mercedes the best sponsored team. That title went to Ferrari, with a total sponsorship budget calculated at £136.8m ($171.5m).

It enables users to analyse trends over time and see how the sponsorship landscape has changed. Modern F1 is very different to 2005 when the biggest sponsors were tobacco companies, spending almost a quarter of a billion dollars between them in the last full year before advertising restrictions drove them from the sport.

The database draws on the extensive experience of the Formula Money team and incorporates data that has been compiled for reports over the course of more than a decade.

As well as sponsorship values, the database includes information on areas such as nationality, industry sector, sponsorship type and branding locations for every deal.

Subscribers can search the database to find, for example, all German financial services sponsors, all sponsors that joined in 2018, or all title sponsors, and can generate graphs and diagrams of the results.

The database is a crucial tool for making decisions when spending in the sport. It's ideal for anyone wanting to know more about the F1 sponsorship industry, including existing and potential sponsors, agencies, investors in FWONK, team management and owners, and executives from other sports and the teams that compete in them.

The Formula Money Sponsorship Database is available now at formulamoney.com