While one only has to look at the Constructors' Championship standings, or even the individual race results, to see a story of two title fights, that between Mercedes, Red Bull and Ferrari, the other for 'best of the rest', in his summation of the gravity of the situation, the sport's technical boss, Ross Brawn, points to another worrying statistic.

Over the last two seasons, only twice has a driver for a team other than Mercedes, Ferrari or Red Bull, made it to the podium. In both instances it was in Azerbaijan, in 2017 Lance Stroll joined Daniel Ricciardo and Valtteri Bottas, while this year it was the turn of Sergio Perez to join Lewis Hamilton and Kimi Raikkonen.

As the sport seeks to level the playing field, Brawn warns that this 'championship of two halves' cannot continue.

"As was the case in 2017, only once and significantly, on a very unusual street circuit like Baku, did a driver from one of those seven teams make it to the podium," says the Briton. "Two podiums from a total of 123 is unacceptable, especially when it comes with an ever increasing technical and financial divide.

"It's a problem we are tackling together with the FIA and the teams, because the future of Formula 1 depends on it," he warns. "There are various solutions on the table and we must all accept that we can't go on like this for too much longer." 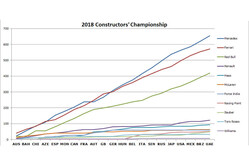 Referring to the battle for best of the rest, which saw Renault claim fourth ahead of Haas, McLaren and Racing Point Force India, which in fact only contested the last nine rounds of the season, Brawn said: "I don't mean to cause offence by referring to the 'other' championship, it's just a way of describing the situation and their battle was certainly thrilling. However, it's hard for the fans to truly get excited about a battle for eighth place. Having said that, congratulations to Renault for finishing fourth, confirming the progress it is making, and to Haas, as finishing fifth in only your third year in the sport is a great achievement.

"Sauber fought back after struggling for the previous two years, partly thanks to the talents of Leclerc," he added. "But a special word goes out to the men and women of Force India who worked hard all season without letting themselves get distracted by the serious problems that affected the company and threatened its very existence. I think that managing to keep Force India on the grid and assuring it a stable future is one of the most important things that happened in 2018."

Levelling the playing field won't be easy, for, much like the way some see communism, the big three would prefer their rivals come up to their level rather than be forced to move down to theirs.

At the heart of the sport's bid to level the field is a budget cap which would limit the teams to the same limit on spending, whilst also distributing the prize money more equally.

While the smaller teams make no secret of the fact they want this to happen, the proposal has not down well with the big three.

"The first steps for the future have therefore been taken, but there's still a lot to do in the coming crucial months," admits Brawn in a masterpiece of understatement.

Check out our Wednesday gallery from the Yas Marina test, here.